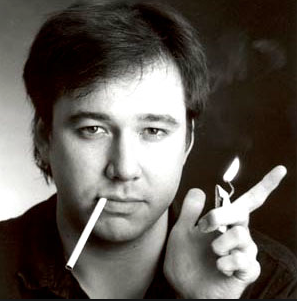 It was on this date, December 16, 1961, that American stand-up comedian, social critic, satirist, and musician Bill Hicks was born in Valdosta, Georgia. The family settled in Houston, Texas, by the time Hicks was seven. Drawn to comedy early, he was influenced by Richard Pryor and began to emulate Woody Allen. Hicks also got an early start poking fun at religion, calling his family “Yuppie Baptists” because “We worried about things like, ‘If you scratch your neighbor’s Subaru, should you leave a note?’” He recounted a conversation with his father this way—

”I believe that the Bible is the literal word of God.”
And I say no, it’s not, Dad.
“Well, I believe that it is.”
Well, you know, some people believe they’re Napoleon. That’s fine. Beliefs are neat. Cherish them, but don’t share them like they’re the truth.

The breakthrough year for Bill Hicks was 1990, in which he released his first album, Dangerous, performed on the HBO special “One Night Stand,” and performed at Montreal's “Just for Laughs” festival. His style was conversational, yet he was able to inject pointed attacks on mainstream society, religion, politics, and consumerism. For example: “Eternal suffering awaits anyone who questiond God’s infinite love” and “We have women priests now. What do y’all think of that, women priests? [scattered applause] I think that's fine. So what? Now we’ve got priests of both sexes that I don’t listen to.” Hicks had a special place in his repertoire for creationists—

“God put [dinosaur fossils] here to test our faith!” … I think God put you here to test my faith, dude. Does that bother anybody else, the idea that God might be fucking with our heads? I have trouble sleeping with that knowledge. Some prankster God runnin' around, [pantomimes digging] “We’ll see who believes in me now. I am the Prankster God – I am killing me!”

You ever notice that people who believe in creationism look really unevolved? Eyes real close together, big furry hands and feet. “I believe God created me in one day.” Yeah, looks like he rushed it.”

Hicks was a frequent guest on “Late Night with David Letterman,” appearing 12 times from 1984 to 1993, but his entire stand-up routine was cut from the 1 October 1993 broadcast for ambiguous reasons. It may possibly be because Letterman and his producer were nervous about a religious joke he told: “If Jesus came back he might not want to see so many crosses.” Whatever the reason, Hicks never returned to Letterman’s show and he died on February 26 the next year.

Hicks was diagnosed with pancreatic cancer on 16 June 1993 and gave the final show of his career at Caroline’s in New York on 6 January 1994. On the floor of the British House of Commons, Hicks was memorialized by MP Stephen Pound, who compared him favorably to Lenny Bruce as “one of the few … unflinching and painfully honest political philosophers.” (2/25/2004). Although his biographer on Wikipedia seems to wish to save Hicks from the ignominy of atheism, it is clear that he had no respect for religion and a hope for, rather than a belief in, a future life. “I wish I could meet a Christian who would proselytize to me,” said Hicks. “But they keep running away from me. I wanna talk to you all.” (11/11/92) Bill Hicks died at a young 32 years of age on 26 February 1994. His epitaph might have been these words he asked to be released after his death: “I left in love, in laughter, and in truth and wherever truth, love and laughter abide, I am there in spirit.”