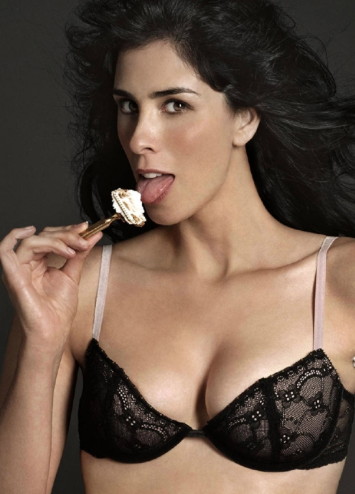 It was on this date, December 1, 1970, that American comedienne, writer, and actress Sarah Silverman was born Sarah Kate Silverman into a Jewish family in Manchester, NH. Silverman says she was not “raised with any religion,” only considering herself ethnically Jewish. Her comic style addresses social taboos and controversial topics such as racism, sexism, and religion by criticizing such small-mindedness ironically. Lasting only one unmemorable year on “Saturday Night Live,” Silverman graduated to “Mr. Show” (1995), to starring in and producing a one-woman show called “Sarah Silverman: Jesus Is Magic,” filmed in 2005, and “The Sarah Silverman Program” on Comedy Central (2007-2010). Silverman has also appeared movies such as Who’s the Caboose? (1997), School of Rock (2003), Wreck-It Ralph (in voice-over) (2012) and, after gracing the cover of Maxim Magazine’s 100 Hottest Women issue (2006), appeared nude in Take This Waltz (2011).

About her Jewishness, which Silverman mines for material, she says, “I have no religion. But culturally I can’t escape it; I’m very Jewish.” In a 2007 interview in MacLean’s, a Canadian weekly news magazine, Kate Fillion asked, “Are you an observant Jew?” “Nope. I have no religion,” said Silverman. “I’m only Jewish ethnically. Culturally.” Pressing further, the interviewer asked, “Who scares you more: the President of Iran [Mahmoud Ahmadinejad], or the President of the United States [George W. Bush]?” “They both do. All fundamentalists from any group or religion scare me. And any nationalism scares Jews by nature” (10/22/2007).

If your religion is worth killing for, start with yourself. … Let's get into the Christmas Spirit & lie about how we got pregnant. —@SarahKSilverman tweets

During a 2005 interview, KCRW radio host Elvis Mitchell commented on her “Jesus Is Magic” t-shirt, to which Silverman replied that she is “almost positive there’s no god” (11/16/2005). She also pokes fun at Catholics: in a quip from 2009, Silverman suggested to the Pope, “The bottom line is this… if you sell the Vatican and you take that money and you use it to feed every single human being on the planet you will get crazy pussy.” During a 2009 appearance on “Real Time With Bill Maher" on HBO, Silverman said, “I can’t imagine there’s a God, personally. Um, I’m not religious. I don’t have, wow. I don’t have religion at all.” When Maher, an atheist, said he agrees, she added, “I'm not ruling it out.” (3/13/2009). But in a Twitter comment, Sarah Silverman took the issue to its materialistic elements: “We’re all just molecules, Cutie.”

If it turns out that there is a God, I don't think that he's evil. But the worst that you can say about him is that basically he's an underachiever.