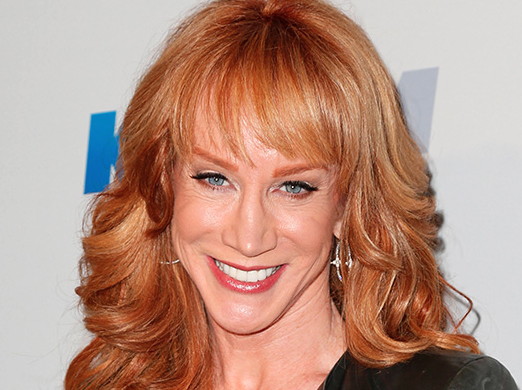 It was on this date, November 4, 1960, that American comedian and actress Kathy Griffin was born Kathleen Mary Griffin in Oak Park, Illinois. At about age 18, she moved to Los Angeles to study drama at the Lee Strasberg Theatre and Film Institute, becoming a member of The Groundlings improvisational comedy troupe like her contemporary, Julia Sweeney. By the 1990s, Griffin began performing stand-up comedy and guest-starring on television shows until landing a supporting role on the NBC sitcom “Suddenly Susan” (1996–2000). The “the flame-haired, gravel-voiced comedian” came to national attention on the Bravo reality show “Kathy Griffin: My Life on the D-List” (2005–2010), which earned her two Emmy Awards for Outstanding Reality Program. Known for her conversational style and controversial statements on celebrities, religion and sexuality, Griffin is an LGBT activist and promotes such causes as the legalization of marriage equality.

According to her memoir, Official Book Club Selection (2010), as a young girl, Griffin attended a Roman Catholic elementary school, but due to the punishments meted out by the nuns to herself and other “vulnerable” students, she began to develop a dislike for organized religion. While in high school, she fell away from the Roman Catholic Church and said she wanted to become a Unitarian, but wasn’t quite sure what that required. Said Griffin, “My parents sent me to Catholic school, which only made me the vehement militant atheist that I am today.” Later on, Griffin rocked the entertainment world with her 2007 Emmy Award acceptance speech (“Outstanding Reality Program” award to “My Life on the D-List,” 9/16/2007), when she quipped,

Now, a lot of people come up here and thank Jesus for this award. I want you to know that no one had less to do with this award than Jesus. He didn’t help me a bit…. So all I can say is suck it, Jesus, this award is my God now!

… “as if Jesus doesn't have anything better to do than make sure that someone got their People's Choice Award or whatever,” she later told an interviewer. The speech drew predictable criticism from Catholic League President Bill Donohue, who denounced what he characterized as “hate speech” and blasphemy – the latter a crime invented by the religious to keep them from losing arguments. The network agreed to be bullied by the League and Griffin’s “offensive remarks” were censored when the event was broadcast on the E! channel and edited from official Emmy Awards broadcast the next day on Fox. TV host (and Catholic) Bill O’Reilly called her a “pinhead” for the remark, which Griffin enjoyed as a “badge of honor.” In response, Griffin told Reuters, “Am I the only Catholic left with a sense of humor?” and on her website labeled the remarks “what will go down as one of the best quotes in Emmy history.” She continues in a 2009 interview (“Keeping it real in Hollywood hinterland” by Bridget McManus, 2/26/2009):

I have had death threats. It’s fun to offend people but I also enjoy offending entire religious groups. I know that I have pissed off a lot of Christians … I’d really like to piss off some Muslims and some Jews as well. And I love going after Scientology because they have the least sense of humor out of all of them.

“In America,” Griffin says, “they’ll pretty much shoot you for saying that you’re an atheist so I’m just trying to live another day. But the stigma of not being religious in this country is actually pretty frightening. It’s not like atheists start wars.” But Griffin sometimes shies away from the atheist label: “I am what you call a non-believer. I don't even want to say I’m an atheist because frankly I don't want to join their club either. But the point is, I am a fallen Catholic, I’m not religious, and that’s all well and good.”

As if to underscore the point with parody, Griffin had become an Ordained Minister with the Universal Life Church Monastery in 2008, the year after she was voted 17th of the Oxygen TV channel’s “50 Funniest Women Alive.”

Donald Sutherland (1934) It was on this date, July 17, 1934, that actor Donald Sutherland was born Donald McNichol Sutherland in Saint John, New Brunswick, Canada. The unusual-looking, lanky actor reached a height of 6'4" (1.93 m) by adulthood, and his distinctive voice seems to have been bequeathed to his son, actor Kiefer Sutherland. After […]