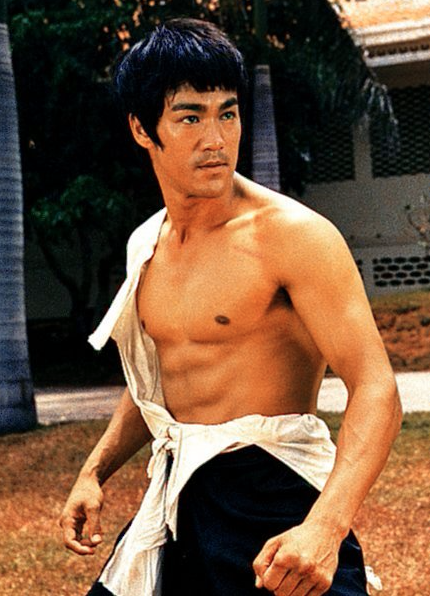 It was on this date, November 27, 1940, that Chinese-American martial artist, actor and creator of Jeet Kune Do, Bruce Lee (李小龍) was born Lee Jun-fan (李振藩) in San Francisco’s Chinatown, the son of a Chinese opera star father and a half-Caucasian mother. Lee’s family returned to their home in Hong Kong after his birth, where he studied Wing Chun style martial arts from 1954, presumably because he kept getting into, and losing, street fights. After beating up the son of a feared triad family, Lee’s father sent him back to the country of his birth to stay with a relative in San Francisco in 1959. While teaching martial arts, Lee attended the University of Washington as a drama major, but studied philosophy and was well read in other subjects. It was there that Lee met his future wife, Linda Emery, and married her in 1964, producing two children: Brandon Lee (1965–93) and Shannon Lee (born 1969).

After some moderate success in supporting roles on American TV shows, such as “Green Hornet” (1966-1967) and “Batman” (1966), Lee returned to Hong Kong and took leading roles in The Big Boss (1971) and Fist of Fury (1972). Lee achieved creative control for his third film, Way of the Dragon (1972) and much box office success. The next year, 1973, Lee starred in two more films, Enter the Dragon and Game of Death, although the latter one was never completed. Around 1967, Lee developed a fighting style-without-a-style which he called “Jeet Kune Do” (截拳道) – literally, “the way of the intercepting fist” – that was particularly suited to street fighting. Said Lee, “Use only that which works, and take it from any place you can find it” (Bruce Lee: Fighting Spirit, 1994, by Bruce Thomas, p.44). His popularization of martial arts inspired the 1974 Carl Douglas song “Kung Fu Fighting” and the 1972-1975 TV series, “King Fu,” for which he was passed over as lead in favor of David Carradine. Nevertheless, Bruce Lee is considered the most influential martial artist in modern times. On 10 May 1973, Lee died of an acute cerebral edema, caused by an adverse reaction to medication, and was buried in Seattle, WA.

Author John Little, with credentials in philosophy as well as health and fitness, was given by Bruce Lee’s estate an unprecedented access to the martial arts icon’s papers and notes. He came away with some unique insights, writing in The Warrior Within: The Philosophies of Bruce Lee (1996), “Lee felt that anything which substituted the ways or beliefs of others in the place of teaching you how to cultivate your own was a step in the wrong direction. For this reason, Lee was opposed to the doctrines – or rather the dogmas – of organized religion.” In an interview videotaped in the summer of 1972, journalist Alex Ben Block (author of The Legend of Bruce Lee, 1974) rather apologetically asked Lee what his religious affiliation is. Lee answered, “None whatsoever.” Pressing further on whether or not he believes in God, Bruce Lee replied, “To be perfectly frank, I really do not.”