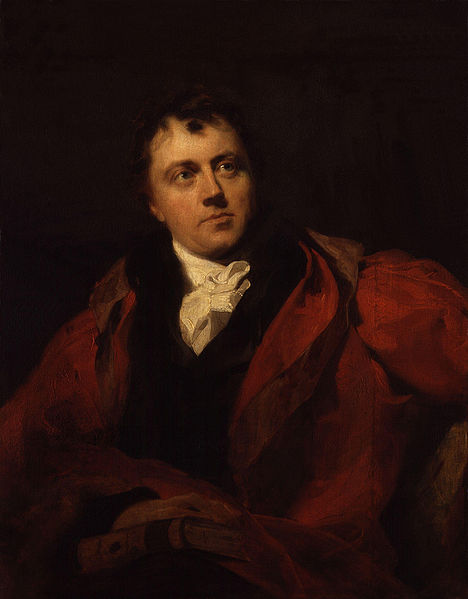 It was on this date, October 24, 1765, that Scottish political philosopher and politician James Mackintosh was born in Aldourie, near Inverness-shire, Scotland. Because his mother died while he was a child, and his father was frequently abroad, Mackintosh was reared by grandparents. He studied at King's College, University of Aberdeen and, in 1787, took his degree in medicine at Edinburgh University. By 1788, Mackintosh had settled in London, associated with and supported progressives there, and began writing in defense of the French Revolution: in April 1791, he published Vindiciae Gallicae, an answer to Edmund Burke’s Reflections on the French Revolution. Even Burke was impressed. His writing was so forceful and well received by progressives that Mackintosh not only made many friends (including Burke), he decided to drop medicine for law. He was called to the bar in 1795 and was professor of law at the East India Company’s College at Haileybury from 1818 to 1824. He was knighted in 1803. By 1813, Mackintosh had become a liberal Whig Member of Parliament, and although becoming less radical as his career progressed, he participated in many reforms and served as a liberal until his death.

Sir James Mackintosh was one of the society that met regularly at the home of Henry Richard Vassall-Fox, 3rd Baron Holland, known as “Holland House,” a noted gathering-place for Whigs in the 19th century. In his Memoirs (vol III, p331), Charles Greville quotes historian John Allen, popularly known as “Holland House Allen,” commenting on Mackintosh’s “declaration of religious belief on his deathbed, when he had never believed at all during his life.”* His pious son, Robert James Mackintosh, failed to convert his father before his death in 1832, as he honestly recounts in his Memoirs of the Life of the Right Honourable Sir James Mackintosh (1836, vol. IV, pp485-490). English jurist John Taylor Coleridge, in Memoir of Baron Bramwell (Letter of October 18, 1877), classed Mackintosh as an unbeliever with the likes of John Stuart Mill, John Tyndall, and Thomas Henry Huxley. In fact, Mackintosh lived and died a Deist.

= = =
* “Allen talked of Mackintosh, and of his declaration of religious belief on his deathbed, when he had never believed at all during his life. He said that Mackintosh was not very deeply read in theology. … He thought if Mackintosh had lived much with Christians he would have been one too.” (Memoir, vol. 3, December 16th, 1835) A note appended to the text says, “John Allen was himself so fierce an unbeliever, and so bitter an enemy to the Christian religion, that he was very fond of asserting that other men believed as little as himself. It was almost always Allen who gave an irreligious turn to the conversation at Holland House when these subjects were discussed there.” John Allen lived 1771-1843.

Michael Kinsley (1951) It was on this date, March 9, 1951, that writer and editor Michael Kinsley was born in Detroit, Michigan. Kinsley graduated from Harvard University in 1972, there distinguishing himself as vice president of the University's daily newspaper, The Harvard Crimson. After spending his Rhodes Scholarship at Magdalen College, Oxford, in the UK, […]