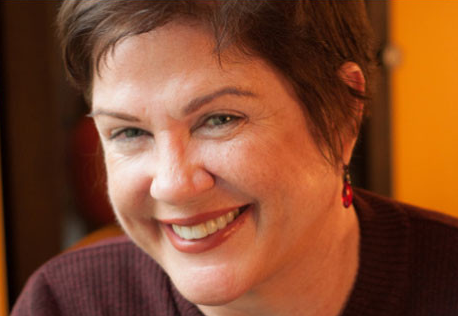 It was on this date, October 10, 1959, that American actress, comedian and author Julia Sweeney was born in Spokane, Washington. From her start with the improvisational comedy troupe The Groundlings, Sweeney was discovered in 1989 by “Saturday Night Live” producer Lorne Michaels and became a featured player on the TV show from 1990 to 1994. One of her most memorable characters on SNL was the androgynous Pat, whose difficult-to-determine sex was the basis for Sweeney’s popular “It’s Pat!” skits. Although she has appeared in several films, Sweeney is principally known for her comic monologs. Sweeney’s most notable autobiographical monologues are God Said Ha! (about her brother Michael’s losing battle with lymphoma, which won the 1996 New York Comedy Festival’s Audience Award), In the Family Way (about the adoption of her daughter from China), and Letting Go of God.

Letting Go of God is about my search for a God I can believe in. I was raised Catholic. I appreciated my birth culture and still consider myself to be culturally Catholic. But as I delved into the Bible more deeply, I found it impossible to reconcile my skepticism and what the church expected us to believe. I tried to find God through other religions and eventually gave up on believing in God entirely. …

It all started with How We Believe by Michael Shermer. … I went from reading Shermer to reading Carl Sagan, then to Daniel Dennett, to Steven Pinker, to Richard Dawkins,* to Susan Blackmore, to Victor J. Stenger, and others.

I stopped believing in God. It was quite dramatic. I wasn’t wishy washy about it. I wasn’t merely non-religious. But what I discovered wasn’t a world without God, but instead a fully natural world: precarious, messy, cruel, and glorious. I found I had enormous appreciation for a method that gets us closer and closer to truth: the scientific method. What I discovered was simply this: good, solid critical thinking. I began to look at my whole world using that that lens. What I found was a powerful and profound way of looking at life and my participation in it as a live being. This seemingly subtle shift had reverberations that, to this day, still surprise me. I found myself to be more compassionate, more realistic, more concerned, and more meaningfully engaged with the natural world.

Julia Sweeney is a part of the regular rotation of panelists for the NPR news quiz radio show “Wait Wait... Don't Tell Me!” and is on the Secular Coalition for America Advisory Board and the Freedom From Religion Foundation Honorary Board of Distinguished Achievers. In an August 15, 2005 interview in the SF Gate, entitled “Finding My Religion,” Sweeney tells her interviewer about how she became an atheist. “Was there a turning point in terms of your leaving behind religion? Did you just wake up one day and realize you were an atheist?” Sweeney answered, “No. It was a long process. I just became a stronger agnostic, and then I started to realize that everyone who was saying they were agnostic really hadn't thought about it that much. Still, I went with agnosticism for a long, long time because I just hated to say I was an atheist -- being an atheist seemed so rigid. But the more I became comfortable with the word, and the more I read, it started to stick.”

*Dawkins returned the favor by mentioning her monologue Letting Go of God in his 2006 best-seller, The God Delusion.

1977) "He passionately believed that Buddhism promoted a far better attitude toward daily life than did Christianity."