GPS and Its Discontents 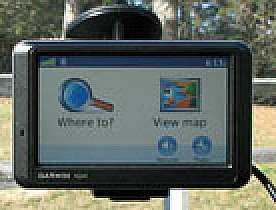 I have a GPS in my car, that space-based satellite navigation system that tells me where to go and where to get off at. Oh, I know where my usual destinations are, but in my work I travel to a lot of new places from, or to, my accustomed destinations, so I don’t always know the quickest route there. GPS helps.

As Sir Arthur C. Clarke once said (Clarke’s Third Law) “Any sufficiently advanced technology is indistinguishable from magic.” So it is with GPS, in my opinion. I don’t know how it works, I just care that it works. Nothing consequential depends on me understanding the maths behind GPS operation. I am content that it’s “magic.” But GPS is not perfect. I’ve used many brands over several years and they all have the same flaws.

When I’m traveling the highway, it is annoying as hell not to be able to see the number of miles to the exit I need to take: that’s because GPS always tells me how many miles it is to the exit I don’t take. I’m sure somebody, somewhere, cares that when you’re traveling Interstate 1, you don’t get off on Interstate 2 at exit 6, but keep going to exit 13. But, trust me, I am capable of understanding that if I’m supposed to get off at exit 13, I’m sure as hell not getting off at exit 6. I don’t need GPS to tell me what exit not to take!

As I frequently complain to autocorrect: “Don’t help me!”

Another flaw is in terminology. Believe me, I know the difference between “bear right” and “turn right.” Bearing right may put me on a different road, but it’s a gradual change. A turn is an intersection where you go right or left, typically overseen by a stop sign or a traffic light. So why does my GPS tell me to “bear right” when it is clearly a road change and a right turn?

But my greatest discontent is something far less high-tech. I get that GPS is a marvel of military engineering reduced to the simplicity of a consumer device. I get that it’s a navigation system capable of pinpoint accuracy for missile and projectile guidance, reconnaissance, and nuclear weapon detonation—and less critical things such as surveying, geofencing and fleet tracking. As I said: to me it’s magic.

Yet with all this whiz-bang technology, can anybody explain to me why nobody can make a suction cup that will hold the damned thing to my windshield?

Alan M. Dershowitz (1938) It was on this date, September 1, 1938, that Harvard law professor and civil liberties lawyer Alan Morton Dershowitz was born in Brooklyn, New York. First in his class at Yale Law, he was appointed to the Harvard Law faculty at age 25 and became the youngest full professor in the […]