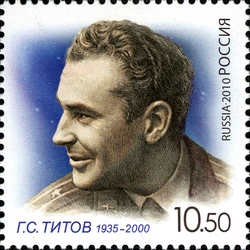 It was on this date, September 11, 1935, that Soviet Cosmonaut Gherman S. Titov (Герман С. Титов), was born in the Altai Republic, southern USSR. He studied at the Stalingrad Military Aviation School and, after graduating as an air force pilot, he was selected for cosmonaut training in 1960. Titov became, on 6-7 August 1961, the second man to orbit the Earth, aboard Vostok 2 – preceded by Yuri Gagarin on Vostok 1) – and the first to spend an entire day in space. The 5-foot 4-inch (163 cm) Titov was the fourth person in space, counting the suborbital voyages of U.S. astronauts Alan Shepard and Gus Grissom, and he remains the youngest person to orbit the earth. Vostok 2 was his only flight in space, but that and his ebullient personality and boyish good looks made him a worldwide heartthrob. Fond of females, fast cars and liquor, he took his celebrity and ran with it. This inevitably resulted in auto accidents and complications with women. Although he qualified as a test pilot by 1967, after Yuri Gagarin’s 1968 death in an air crash, the Soviet authorities decided they could not allow this wild young man to deprive them of another space hero. They refused him further permission to fly. Titov settled for a career at the Soviet Ministry of Defense.

Titov came the tour the United States in 1962 and met both President Kennedy and Vice President Lyndon Johnson. He toured the Seattle Century 21 Exposition on May 5 and May 6 and was extensively interviewed. Asked how his 25-hour flight in space affected his philosophy of life, Titov replied through his interpreter, “Sometimes people are saying that God is out there. I was looking around attentively all day but I didn’t find anybody there. I saw neither angels nor God.” His American audience was stunned at this remark, but he went on: “Up until the orbital flight of Major Gagarin, no god was helping make the rocket. The rocket was made certainly by our people and the flight was carried out by man.” This totally changed the editorial narrative in cold-war America: before, Titov was described as affable and polite, but after sniping at the God in whom America had placed its trust only eight years earlier, he was editorially reduced to a godless communist, spewing Soviet “anti-religious propaganda.” Nevertheless, Titov finished his interview in character, saying, “I don’t believe in God. I believe in man – in his strengths, his possibilities and his reason.”

Here’s your Week in Freethought History: This is more than just a calendar of events or mini-biographies – it’s an affirmation that we as freethinkers are neither unique nor alone in the world, no matter how isolated and alone we may feel at times. Last Sunday, May 13, but 440 years ago, was the election […]