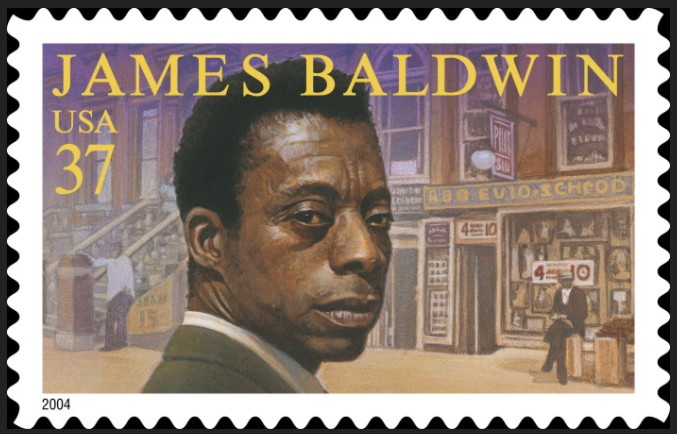 It was on this date, August 2, 1924, that American writer, social critic and civil rights activist James Baldwin was born James Arthur Baldwin in Harlem, New York City, U.S.A. Known chiefly for his semi-autobiographical Bildungsroman,* Go Tell It on the Mountain (1953), which examines the role of the Christian Church in the lives of African-Americans, and for his essay collections, including The Fire Next Time (1963), No Name in the Street (1972), and The Devil Finds Work (1976), Baldwin took bold and critical looks into largely uncritically accepted racial, sexual, and class distinctions in American society. Indeed, he was known to say, “I love America more than any other country in this world, and, exactly for this reason, I insist on the right to criticize her perpetually.”

Brought up in a home with an abusive stepfather, Baldwin escaped to church at age 14 and became a Pentecostal preacher. But by age 17, he had come to believe Christianity is based on false premises. He left the church, but retained the cadences of its pulpit rhetoric and its worldview in his writing. In his coming-of-age novel Go Tell It on the Mountain, Baldwin explored his view that Christianity is used for social control tinged with moral hypocrisy, yet at the same provides inspiration and a sense of community. As he put it, “being in the pulpit was like being in the theatre; I was behind the scenes and knew how the illusion was worked.”

Baldwin’s frustration with racism and homophobia precipitated his expatriation to Europe in 1948, at first to Paris, where he involved himself in the culture of artists, writers and philosophers known as the Left Bank. He returned in 1957 to write about the civil rights struggle in the U.S., met Martin Luther King Jr., and published widely on the struggle. He found kindred spirits in the Congress of Racial Equality (CORE) and the Student Nonviolent Coordinating Committee (SNCC) without completely discounting the ideas and approach of Malcolm X. As recounted in “Down at the Cross” (in The Fire Next Time), while visiting Nation of Islam founder Elijah Muhammad, Baldwin was asked about his religious beliefs. He answered, “I left the church 20 years ago and haven’t joined anything since.” Elijah asked, “And what are you now?” Baldwin replied, “I? Now? Nothing. I’m a writer. I like doing things alone.”

In 1963, Baldwin made the cover of Time magazine as one of the most eloquent civil rights spokesmen and marched on Washington, DC, and from Selma to Montgomery – all the while speaking and writing about civil rights and voting rights. Even so, he rejecting the label “civil rights activist,” calling the movement instead (in a U.C. Berkley lecture) “the latest slave rebellion.” While praising religion for inspiring black people to resist oppression, he criticized it for reinforcing American slavery. Baldwin’s writing and lecturing inspired singer Nina Simone, novelist Toni Morrison and poet Maya Angelou.

At a time when the religion-inspired civil rights activists, like Martin Luther King Jr. and John Lewis, got most of the press, the skeptics in the movement, like Baldwin, novelist and author Richard Wright, poet Langston Hughes, labor organizer A. Philip Randolph and historian W.E.B Du Bois, seem to disappear. Although he never described himself as an atheist, it was James Baldwin who said, “Christianity has operated with an unmitigated arrogance and cruelty – necessarily, since a religion ordinarily imposes on those who have discovered the true faith the spiritual duty of liberating the infidels. … If the concept of God has any validity or any use, it can only be to make us larger, freer, and more loving. If God cannot do this, then it is time we got rid of him.”