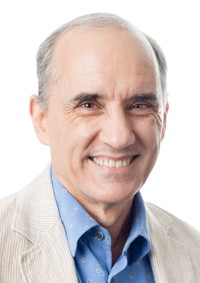 It was on this date, June 25, 1949, that American ex-preacher and atheist activist Dan Barker was born. A successful musician, Barker has composed over 200 songs and at least two Christian musicals for children, “Mary Had a Little Lamb” (1977), and “His Fleece Was White as Snow” (1978). He was ordained a minister in 1978 and served as a pastor for the Religious Society of Friends (Quakers), the Disciples of Christ and the Assemblies of God. In January 1984, after five years of extra-curricular reading and study, Barker announced publicly that he had “lost faith in faith” and become an atheist. His journey from evangelism to atheism is told in two books, Losing Faith in Faith: From Preacher to Atheist (1992) and Godless (2008).

Barker became PR Director of the Freedom From Religion Foundation (FFRF) in 1987 and married its president, Annie Laurie Gaylor that same year. In 2004 he was elected co-president with Annie Laurie Gaylor, the co-founder (with her mother and John Sontarck) of FFRF, which is arguably the largest nonprofit organization of atheists and agnostics in the United States. Together, Barker and Gaylor host “Freethought Radio,” a national weekly radio talk show on WXXM in Madison, WI (and also on podcast) with frequent high-profile guests and discussions of the court cases the organization initiates to ensure freedom from religion for those who desire it. Barker is a contributing editor to the FFRF Freethought newspaper Freethought Today. An outspoken atheist writer and speaker, Dan Barker has said,

The very concept of sin comes from the bible. Christianity offers to solve a problem of its own making! Would you be thankful to a person who cut you with a knife in order to sell you a bandage? … You can cite a hundred references to show that the biblical God is a bloodthirsty tyrant, but if they can dig up two or three verses that say God is love, they will claim that you are taking things out of context! … For my money, I’ll bet on reason and humanistic kindness. Even if I am wrong I will have enjoyed my life, the existence of which is under little dispute. … Not thinking critically, I assumed that the successful prayers were proof that God answers prayer while the failures were proof that there was something wrong with me. … If the answers to prayer are merely what God wills all along, then why pray? … The longer I have been an atheist, the more amazed I am that I ever believed Christian notions. —Losing Faith in Faith: From Preacher to Atheist (1992)

Christians have tried to use Dan Barker’s personal deconversion story as a cautionary tale against losing faith. One such blogger, Wintery Knight, mused on why atheists like Dan Barker abandon their faith and came up with four reasons: (1) They want to do something immoral with impunity; (2) They want to pursue happiness in irresponsible ways; (3) They want to be loved by people, not by God; (4) They don’t want to learn to defend their faith.

Now, to anyone who has even a casual relationship with reality and Christianity (and you don’t even need to know Dan Barker), these rationales are howlers. Reason 1 is the exact opposite of reality: if you want to do something immoral, what better framework than an infinite forgiveness system like Christianity? For an atheist, there is no forgiveness, no heaven as reward, so you had better do right the first time.

Reason 2: Leaving aside that “pursuit of happiness” follows only life and liberty in the Jesus-free Declaration of Independence, what is “irresponsible”? Are we so petulant that when God doesn’t give us our way we give up on God? Or do we become atheists because the heavens are indifferent to our entreaties and we refuse to continue making excuses for the failure of prayer? Happiness is more satisfying when personal responsibility is accepted and used to achieve it.

Reason 3: Atheists often start out wanting to be loved by God, but reality and morality get in the way and we realize that only people are real, as is their love. Besides, what kind of loving god would create a hell just in case you don’t love him back?

Reason 4: Leaving aside that most atheists know the Bible better than the average Christian, the criticism again has it exactly backwards. They’ve read the apologists and found their arguments unconvincing. And they’ve read the critics of religion – something Wintery Knight, like the Catholic Church, counsels against – and found them compelling. And what is there in religion to defend? The criticism would bear more weight if religion were not built on a foundation of commands divorced from morality and reality. Think of slavery: the Bible condones it; it ended because humans looked within their hearts and enacted extra-biblical morality.

Thanks and a tip of the hat to RJ Evans of The American Heathen® for his contributions to this post. Any errors, of course, are my own.