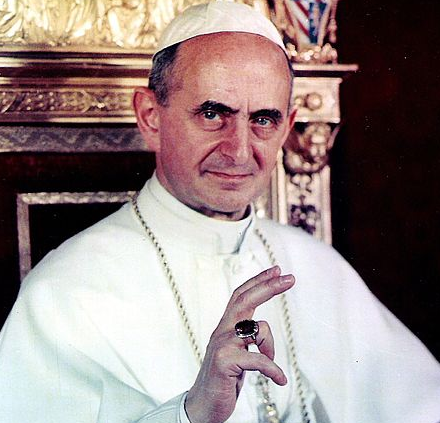 It was on this date, June 24, 1967, that Pope Paul VI promulgated the encyclical Sacerdotalis Cælibatus, The Celibacy of the Priest, reaffirming the that the “brilliant jewel” of priestly celibacy must remain a Roman Catholic command. To be celibate, as the term was originally understood, means to be unmarried, as distinguished from being chaste, which originally meant being virtuous or pure. The secondary meaning for both words is to abstain from sexual intercourse, which gives rise to confusion between them (Wikipedia unfortunately perpetuates the confusion).

There are examples of celibacy, including sexual abstinence, from all religions and throughout history. In Sparta, failure to marry was a crime and could deprive you of citizenship. Roman law forbade celibacy, but this was neither policed nor prosecuted. Buddha renounced his wife and, when his atheistic ethic became a religion, celibacy was promoted to an ideal. Hindu sadhus are ascetics who withdraw from worldly ties, including sexual relations. Muslims counsel celibacy only before and outside of marriage, but do not encourage it within marriage. At bottom, celibacy/abstinence is a deliberate choice intended to focus one’s energies on a religion or a cause – as if sex and religious devotion are somehow mutually exclusive rather than intimately associated!

In Christendom, celibacy – that is, being unmarried – is supposed to include sexual abstinence, but it was by no means a certainty. Except to Pope Paul. Paul doesn't even pretend to critical thought on the issue: the decision has been made long ago, and he only shores up its foundation. He praises matrimony (¶21), but points out that Christ was celibate his whole life, “which signified His total dedication to the service of God and men,” – and priests must emulate this. Furthermore, citing Luke, Christ called men to abandon “home, family, wife and children for the sake of the kingdom of God” (¶22). Indeed, celibacy increases a priest’s “ability for listening to the word of God and for prayer” (¶27) as the earthly representative of Christ (¶29).

Paul even gets downright depressing, although unintentionally so, when he cites Gregory of Nyssa saying, “the life of virginity is the image of the blessedness that awaits us in the life to come” (¶39)! But the one thing Paul fails to do in his encyclical is to reconcile his praise of celibacy and his (rather tepid) praise of marriage. It’s all so medieval – because that’s when the church adopted the worst ideas of the ancient pagan religions into the new religion.

The taboo against sex stems from the ancient idea in some pagan religions that a woman is “unclean” (at least during her menstrual period). Therefore, to be clean, pure and virtuous (the definition of “chaste”), and therefore sacred, you must abstain from sex. We see this celibacy/chastity idea adopted by the (godless) Buddhists and Jains in India, by the Aztec priests in Mexico and the Mayan priests in Central America, by the priestesses of Diana at Ephesus in Asia Minor. The priests of the Great Mother cult in Phrygia went so far as to castrate themselves. The Persian cult of Zoroaster developed the idea that the flesh was created by the devil, an idea the early Christian cult eagerly adopted to set themselves apart.

But the perversity of celibacy was an idea more easily articulated to than enforced on creatures of flesh and blood. After the 4th century Council of Nicæa refused to adopt the rule, it took until the Lateran Council of 1215 to get the whole Catholic Church to agree on priestly celibacy. Priests commonly married up until the 11th century – they still can and do in the Eastern Orthodox Church – but Gregory VII (Hildebrand) brutally enforced celibacy with help from Patarene thugs. The natural result of legislating against human nature is an abundance of unnatural vice and ultimate disrespect for the Church. The modern problems with priestly child molestation occurred in all ages.

The least sordid consequence of the celibacy rule is a dropping-off of candidates for the priesthood, and an evacuation of the ranks of priests those who no longer wish to live in such an unnatural state.