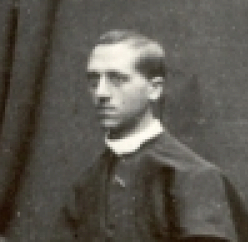 It was on this date, June 23, 1858, that 6-year-old Edgardo Mortara was kidnapped from his Jewish parents in Bologna, Italy, by agents of the Inquisition, under the Dominican Father (Pier Gaetano) Feletti. The parents, Momolo and Marianna Mortara, later learned that their Christian maid, Anna Morsi, had secretly baptized the boy when he was ill, fearing that he would go to hell if he died a Jew.

In 1858, Italy was divided into kingdoms and the Pope, Pius IX (Giovanni Maria Mastai-Ferretti, 1792-1878), had power over the Papal States, his own canon laws and his own police force. He despised the popular sentiment for Italian unification, espoused by, among others, South American liberator Giuseppe Garibaldi and Italian composer Giuseppe Verdi.

It was the Pope's police force who spirited little Edgardo to Rome, to a home built with funds from taxes levied on Jews. The 66-year-old pontiff was a notorious anti-Semite who believed himself God's agent on earth, so appeals for Edgardo's release were to no avail. And those appeals came not only from Jewish organizations, but from intellectuals and government officials in Britain, Germany, Austria, the US and France, as well as French Emperor Napoleon III, whose troops protected the Pope!

Even the Pope’s Secretary of State, Cardinal Antonelli, begged Pius to give the child back, knowing that this international cause célebre could damage the Church. Instead, the pope smirked, “I couldn't care less what the world thinks.” In 1865, when Edgardo was 13 and well on his way to becoming fully indoctrinated, Pius recalled, “I had the right and the duty to do what I did for this boy, and if I had to, I would do it again.”

The Pope was following canon law which, in effect, allowed kidnapping to spare a “Christian” child a Jewish upbringing. In 2000, during preparations for the beatification of Pius IX, Jesuit Father Giacomo Martina argued that the pope regarded his critics as “unbelievers... [operating] a war machine against the church.” And the same law that permitted the crime acquitted the criminal: the kidnapper, Father Feletti, was freed after trial and lived out his days running a Dominican convent.

The kidnapping of Edgardo Mortara, according to the book of that title by David I. Kertzer*, tipped Italy toward unification and erased the power of the Vatican over the Papal States. Italian unification dates from 1870; Pius IX died eight years later, his Dominican hounds defanged. But Pius did his work well: Edgardo Mortara actually stayed a Catholic, became a priest, and lived out his days in a Belgian monastery, dying at age 88 in 1940. However, the kidnapping was a failure in the long term: liberalism and anti-clericalism took hold in Italy, and this would be remembered long after the Edgardo Mortara incident was all but forgotten.

* David I. Kertzer, The Kidnapping of Edgardo Mortara: The Extraordinary Story of How the Vatican's Imprisonment of a Six-Year-Old Jewish Boy in 1858 Helped Bring About the Collapse of the Popes' Worldly Power in Italy, 1998, ISBN 0679768173. The story inspired a play, Edgardo Mine, by Alfred Uhry, and in 2003 there was rumor of a film, Edgardo Mortara, starring Anthony Hopkins as Pius IX.