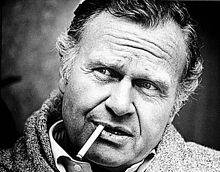 It was on this date, June 22, 1922, that fashion designer Bill Blass was born William Ralph Blass in Fort Wayne, Indiana. He studied fashion design at Parsons School of Design, then worked in counter-intelligence during World War Two. After the war, in 1945 Blass returned to New York and signed on with Anne Klein. He worked his way through several design companies until at last he had his own label, Bill Blass Ltd., by 1959.

Blass’s celebrity client list, who wore proudly his “back-to-back B” design theme, read like a Who’s Who in Hollywood and politics. He even authored a Dining in Manhattan Cookbook (1983) and an autobiography, Bare Blass (2002). Blass donated $10 million to the New York Public Library in 1994. He was a seven-time Coty Award winner and, in 1999, the year his sold his label and retired, received from the Fashion Institute of Technology their first lifetime achievement award. Bill Blass died of cancer at age 79, at his home in New Preston, Connecticut, on 12 June 2002. In his will he bequeathed half of his $52 million estate to the Metropolitan Museum of Art.

In a 1999 interview in SF Weekly, a San Francisco alternative newspaper, Blass would not admit to having religious beliefs, but said, “I have a firm belief in such things as, you know, the water, the Earth, the trees and sky. And I’m wondering, it is increasingly difficult to find those elements in nature, because it’s nature I believe in rather than some spiritual thing.”

The interviewer pressed on, asking, “You’re not a religious man?” Blass replied, “No. And I do suppose that science has taken, to a large extent and for a number of people, has taken the place of religion.” Asked to clarify, Blass concluded, “That one can have more belief in scientific cures or scientific miracles than you do in God miracles. It’s inevitable that we will eventually diffuse into nothingness...” (SF Weekly, 1-8 September 1999).

Edmund Halley (1656) It was on this date, November 8,* 1656, that British astronomer Sir Edmond Halley was born in Hagerston, Middlesex, England (now London), the son of a wealthy merchant. He was educated at Oxford and before graduating took his first astronomical field trip in 1676, to the British-controlled island of St. Helena, where […]