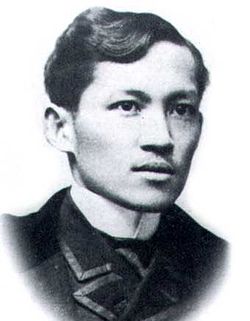 It was on this date, June 19, 1861, that José Rizal was born on the island of Luzon in the Philippines. His family was wealthy enough to provide Rizal with a first-class education, beginning under Jesuit-run, then Dominican-run, institutions. He studied medicine and liberal arts at the University of Madrid. From there he studied at universities in Paris, Heidelberg, Leipzig and Berlin. He began writing novels and returned to the Philippines to practice medicine.

At the time, Spain ruled the Philippines. Educational works in Tagalog, the Filipino language, were strictly suppressed in favor of Spanish, so Rizal’s book on the Tagalog language was a bold publication in 1889. Rizal showed, in such works as Noli Me Tangere, literally, Don't Touch Me (1887), and El Filibusterismo (Subversion, 1891) not only the oppression of Filipinos, but the corruption of Spanish priests and monks – who exacted heavy taxes, stole ancestral lands (including Rizal’s own), and sexually violated the women in their parishes. The Spanish government was not pleased to be thus criticized; the churches were outraged at their exposure.

Although Rizal believed in peaceful reform – as well as freedom of speech, freedom of the press, and the right to a fair trial – he was banished several times for his reform efforts. And although he advocated reform of Spanish rule over revolution, while on his way to aid Cuba during a yellow fever epidemic, he was arrested for sedition, and killed by firing squad, on 30 December 1896. But his "Ultimo Adios," or "Last Farewell," was a poem penned shortly before the shots, reiterating both his love for his country and his disgust at the Spanish politicians and priesthood:

...Farewell, adored country; I leave my all with thee,
Beloved Philippines, whose soil my feet have trod,
I leave with thee my life's love deep; I go where all are free;
I go where there are no torturers, where the oppressor's power shall be
Destroyed, where faith kills not, where he who reigns is God. ...

Rizal died an anti-clerical Catholic. The Spaniards and the priests cheered his execution, but his death sparked the Philippine Revolution that they had hoped to crush – part of it led by his wife. José Rizal was declared a national hero.

Charles Lyell (1797) It was on this date, November 14, 1797, that pioneering Scottish geologist Charles Lyell was born the oldest of 10 children of an active naturalist. He was educated at Oxford and turned from the law to geology, publishing his greatest work, The Principles of Geology, in three volumes from 1830-1833. His researches […]