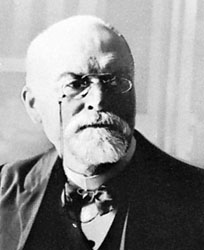 It was on this date, June 18, 1845, that French epidemiologist Alphonse Laveran was born Charles Louis Alphonse Laveran in Paris, the son of an army doctor. His first medical training was as an army doctor in the Franco-Prussian War. Laveran’s keen observations—after observing the parasites in a blood smear taken from a patient who had just died of malaria, he discovered that the cause of malaria is a protozoan of the genus Plasmodium—and later travels and researches, he became an expert in tropical diseases. This expertise, and another a field validation of Pasteur’s germ theory of disease, in which he discovered that protozoans were responsible as well for the disease known as sleeping sickness (African trypanosomiasis), won him the Bréant Prize of the French Academy of Sciences in 1889 and later the Nobel Prize in Physiology or Medicine in 1907—the first French scientist to be so honored. Half of his Nobel prize he donated to found the Laboratory of Tropical Medicine at the Pasteur Institute.

Laveran worked from 1896 until his death in 1922 at the Pasteur Institute, named for Louis Pasteur, the discoverer of the germ theory of disease that shattered the medieval conception that disease signified divine disfavor and that faith and fetishes could cure it. Laveran worked in the field of tropical diseases for 27 years, garnering fellowships in the French Academy of Sciences (1893), the Legion of Honor (1912), and an election as President of the French Academy of Medicine (1920).

Two years before his death in Paris, on 18 May 1922, aged 76, which followed a long (unknown) illness, Laveran was told that his American contemporary Thomas Edison had expressed an interest in Spiritualism. Laveran remarked that he “did not believe a word of the report,” and that he himself “did not believe in spirits.” Both Laveran and Edison were Atheists.

Henry David Thoreau (1817) It was on this date, July 12, 1817, the writer and philosopher Henry David Thoreau was born in Concord, Massachusetts. He graduated Harvard in 1837 and discovered a talent for writing about nature. Thoreau embraced the Transcendentalist belief in personal insight and experience, but he was neither a critical nor a […]