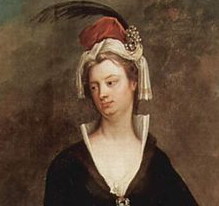 It was on this date, May 15, 1689, that English writer Lady Mary Wortley Montague was born Mary Pierrepont in London. Self-educated in her family’s extensive private library, Mary began writing prose and poetry at an early age. She taught herself Latin and translated Epictetus at age 20. Against her father’s wishes, she eloped with and married Edward Wortley Montague, a grandson of the Earl of Sandwich, in 1712. Her husband became a Member of Parliament for Westminster in 1715, and shortly afterwards was made a Lord Commissioner of the Treasury. Lady Mary’s beauty and wit served her well at court: While in London, her home became a social and intellectual center for deists and she counted Alexander Pope and John Gay in her social circle. In her time, she was considered the most accomplished woman in Europe. However, a misinterpreted private essay circulated while Lady Mary was ill with smallpox caused a scandal at court, and although she recovered from the disease, her reputation did not and she was no longer welcome in that society.

In 1716, Lady Mary’s husband was appointed Ambassador to Constantinople (قسطنطینیه; modern Istanbul). She followed her husband to the Ottoman Turkish capital, where they remained until 1718. It was there that Mary wrote her Letters from Turkey (1725), described as “the very first example of a secular work by a woman about the Muslim Orient,” in which she describes considerable deism and skepticism among educated Muslims in Turkey. The letters provided a valuable female perspective on the country where she spent two years of her life. Her personal letters, published in 1906, are full of rationalist sentiments: “Priests can lie, and the mob believe, all over the world,” she writes (during the embassy to Constantinople, 1717). And she condemns “the quackery of all the Churches” and, while professing a belief in “the Author of Nature,” despises “all creeds and theological whimsies.” She also noted that nowhere else were women as free as they were in the Ottoman Empire, following up with a series of poems about English society’s unjust treatment of women.

She died a skeptic and an early feminist on 21 August 1762 at age 73. It was Lady Mary Wortley Montague who said, "Men, that have not sense enough to show any superiority in their arguments, hope to be yielded to by a faith that, as they are men, all the reason that has been allotted to human kind had fallen to their share. I am seriously of another opinion."

"All Christendom professes to receive the Bible as the word of God, and what does it avail?"