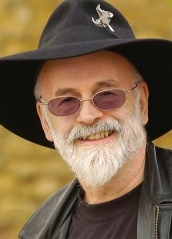 It was on this date, April 28, 1948, that English author of fantasy novels, (Sir) Terry Pratchett was born in Beaconsfield, Buckinghamshire. Although desiring to be an astronomer, Pratchett lacked the mathematical skills and instead stumbled into a love for British and American science fiction. At age 13, Pratchett published his first short story, which came out commercially when he was 15. At 17, he started working as a journalist and in 1971 published his first book, The Carpet People. Still writing part time, Pratchet published the first novel in his most famous series, Discworld, The Colour of Magic, in 1983. After finishing the fourth Discworld novel, Mort, Pratchett turned to writing full time. His writing has resulted in Pratchett being knighted, OBE (Order of the British Empire), in 2009.

The Discworld series, now numbering about 40 novels, imagines a large disc resting on the backs of four giant elephants, all supported by a giant turtle (“Great A'Tuin”) which swims its way through space. The series is a comical parody of many real-world themes – Ancient Greece, Australia, bureaucratic and ruling systems, Egyptian history, fiction, science fiction and fantasy characters, film making, the financial world, the Gulf War, Ingmar Bergman films, newspaper publishing, philosophy, religion, rock and roll music, trade unions, university politics – as well as parodies of fantasy clichés, and has sold more than 70 million copies in 37 languages. Here is a sample from The Colour of Magic:

The early astrozoologists, hauled back from their long dangle by enormous teams of slaves, were able to bring back much information about the shape and nature of A'Tuin and the elephants, but this did not resolve fundamental questions about the nature and purpose of the universe.

For example, what was A'Tuin's actual sex? This vital question, said the astrozoologists with mounting authority, would not be answered until a larger and more powerful gantry was constructed for a deep-space vessel. In the meantime they could only speculate about the revealed cosmos.

There was, for example, the theory that A'Tuin had come from nowhere and would continue at a uniform crawl, or steady gait, into nowhere, for all time. This theory was popular among academics.

An alternative, favored by those of a religious persuasion, was that A'Tuin was crawling from the Birthplace to the Time of Mating, as were all the stars in the sky which were, obviously, also carried by giant turtles. When they arrived they would briefly and passionately mate, for the first and only time, and from that fiery union new turtles would be born to carry a new pattern of worlds.

Pratchett's novels typically cast theocrats and narrow-minded fundamentalists as villains – e.g., Vorbis in Small Gods (Discworld series, 1992) – but he says he is sympathetic to the religious impulse per se and describes himself as a “Victorian-style” atheist, in the sense that he rejects supernaturalism but considers himself culturally and morally Christian. In an article entitled “A Life in The Day of Terry Pratchett,” he says, “I think I’m probably an atheist, but rather angry with God for not existing.” In a 1999 interview he told Anne Gay, “I’m an atheist, at least to the extent that I don’t believe in the objective existence of any big beards in the sky. That is a religious position, by the way.” He describes himself as a humanist and is a Distinguished Supporter of the British Humanist Association and an Honorary Associate of the National Secular Society.

In a 21 June 2008 article in the Daily Mail, Pratchett writes, “There is a rumour going around that I have found God. I think this is unlikely because I have enough difficulty finding my keys, and there is empirical evidence that they exist. … I don't think I've found God, but I may have seen where gods come from.” Elsewhere (from the Guardian, 19 December 2009), Pratchett says his “religion” is that we are “shaped by the universe to be its consciousness. We tell the universe what it is. In my religion, the building of a telescope is the building of a cathedral. I have no truck whatsoever with Genesis. I was inoculated against the Christian religion by reading the whole of the Old Testament in one go (apart from the begats). And I thought if this were true, we were in the hands of a maniac.”

Pratchett’s skeptical take on the world suffuses his novels. In Diggers (1990, the second book in The Nome Trilogy), he writes, “The trouble with having an open mind, of course, is that people will insist on coming along and trying to put things in it.” Terry Pratchett died on 12 March 2015 at age 66. About his place on the evolutionary tree, Pratchett once said, “I’d rather be a rising ape than a falling angel.”