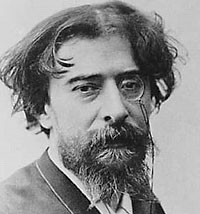 It was on this date, April 4, 1858, that French poet, novelist, and influential critic Remy de Gourmont was born. He earned a bachelor's degree in law at Caen in 1879 and upon his graduation he moved to Paris. From 1881 to 1891, de Gourmont was employed by the Bibliothèque nationale, where he began to write for general circulation periodicals. In 1886, he met Berthe de Courrière, model, mistress and heiress of French sculptor and painter Auguste Clésinger, living with her the rest of his life. In 1891, de Gourmont published a polemic arguing that France and Germany shared an aesthetic culture and urging a rapprochement between the two countries, but French nationalists objected and he ultimately lost his job at the Bibliothèque nationale. His poetic works include Litanies de la rose (1892), Les Saintes du paradis (1898) and Divertissements (1912) in which his poetry ranges from ironic piety to equally ironic blasphemy. As a literary critic, he was admired by T. S. Eliot and Ezra Pound. A poet in the front rank of the Symbolist school, without descending into mysticism, he was a steadfast atheist and detested all religion at a time when skepticism reigned over intellectual France. In his 5-volume Promenades philosophiques (1905, trans. 1913) de Gourmont says that “while religion was always a paganism to the crowd, paganism was almost always the religion of superior minds” (p. 89) and that God is “not all that exists but all that does not exist” (p. 253).

Here is one example—

That your hands are blessed, because they are impure!
They have sins hidden at all the joints;
Their white skin was soaked in the rough odor of the caresses
Secret, among the white shade where the caresses crawl,
And the captive opal which dies in your finger,
It is the last sigh of Jesus on the cross.
—“Bad speeches”

Disfigured by lupus later in life, de Gourmont spent his final years in seclusion. He died 27 September 1915 and was buried in Père-Lachaise Cemetery, leaving Berthe de Courrière his sole heir. She died the following year and was buried next to him. De Gourmont's passionate letters to her from 1887 were published in one volume as Lettres à Sixtine in 1921.