(And Those Dickless Greeks)

My friends warned me not to take a Carnival cruise. They reminded me of the Carnival Triumph, whose engines became disabled in February, and the Carnival Dream that became stranded in the Caribbean in March. But they never warned me about the tacky “art.”

What I saw all over the ship – papering the hallways to the staterooms, covering the elevator walls, mounted throughout each lounge and plastered pretty much anywhere there was wall space – were reproductions of artwork, with Rubenesque ladies and plump cherubs abundant. There was nudity aplenty, female nudity. None of it was vulgar, that is, it was high-class, elitist nudity, not Hustler nudity. (The word “vulgar,” itself, is elitist: it comes from Latin vulgus, that is, “common people,” as if common people are not entitled to titillation, too.) I saw breasts exposed everywhere – I’m not talking about beach and pool, but in paintings and wall art – and there seemed no reticence about it.

That was until I walked the hallway to the fitness center. I remember when the health club or fitness center or athletic club was called simply “the gym,” short for gymnasium, which is where I took gym class at school and work out today. Decorating the hallways to the gym were reproductions of ancient Greek athletes from the original Olympics, copied from pottery. I recognized the paintings. That is, I had seen them before in books… except, one important detail was missing from the wall art that was present in the original art.

The Greek word for gymnasium comes from gymnós (γυμνός), which means “naked.” That describes how the male-only training for competitors in the games were held in ancient times: The athletes wore their birthday suits. But for these athletes, the ones on the walls to the cruise ship’s “gym,” the artist had bowdlerized their boners; he had purged their penes; their genitalia was gone! I wondered why the ithyphallic athletes were left dickless, but I could easily assume. 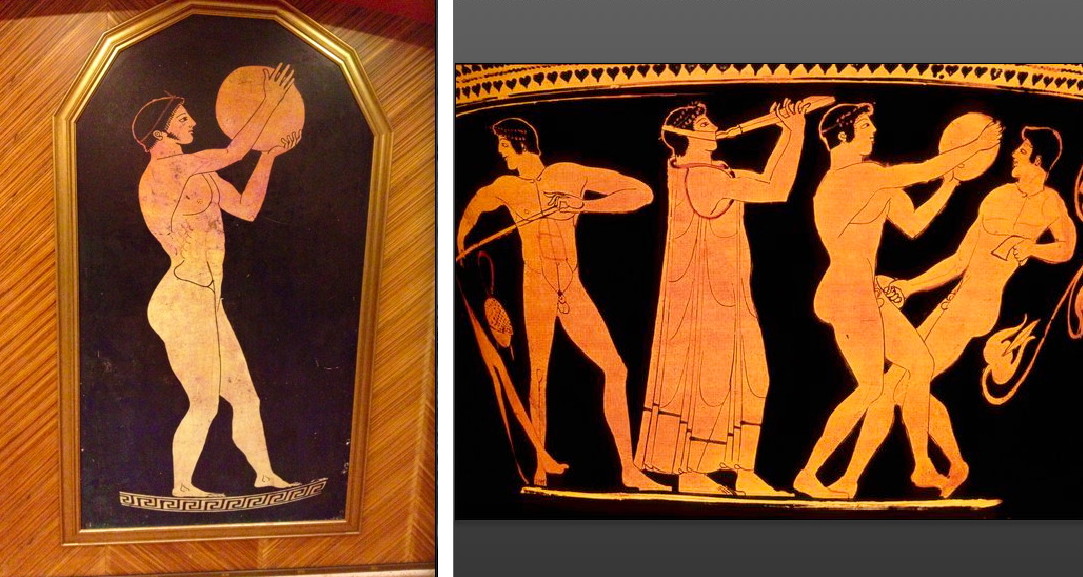 Carnival wall art: on the left, what I saw; on the right, the erectile original.

I acknowledge that it isn’t fair that men have monopolized the language of courage, such as, having balls/cojones meaning possessed of mettle. (My favorite rejoinder comes from M in the 2002 James Bond film Die Another Day, in which she fires back at the admiral who claims she doesn’t have the balls for the job: “But the advantage is, I don't have to think with them all the time.”)

My suspicion is that exposing breasts here and there, at least in classic paintings, is probably tolerable to the largely American (that is, prudish) crowd on the cruise ship. Being classic, it’s pornography that is more or less “grandfathered” into modern culture. There were no John Ashcrofts about, making sure any bare-breasted Spirit of Justice statues are more properly attired. But it was curious that the Greek Olympiads were pictured dickless. Why amputate their members? Was this a double standard? Yes, a penis is a sex organ and breasts are not. But isn’t it just weird, considering the way the athletes are posed, that their masculinity is missing? What did the copyist find so offensive about the organ? Was the artist lacking in manly fortitude?

I could have concluded that here on the Carnival Pride there was a clear double standard about nudity in art… until I happened the ride the lift to Deck 10 and the eponymous restaurant, David’s. There, rising his full 17-foot height above the deck, in imitation white Carrara marble, was a reproduction of the 16th century Michelangelo statue of the Biblical hero. Uncut and flaccid, larger than life and hard to miss, was the missing manhood. 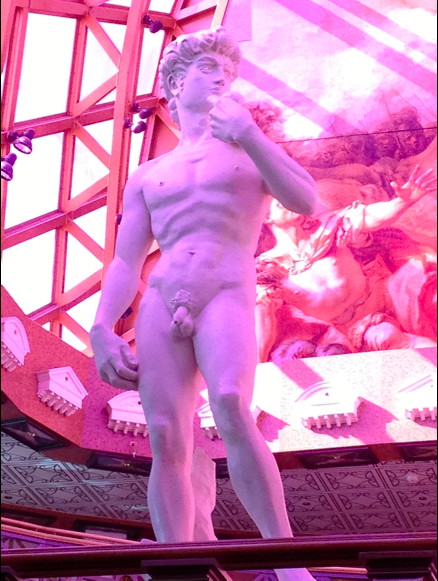 David’s is supposed to be the elitist restaurant aboard the Pride. I found it fully staffed, but I never saw anybody eating there. Perhaps the women were offended and the men felt intimidated under David’s dangling dong?

To hear an audio version of this Rant, click on this link: DicklessGreeks

In a note to Donny and Marie Osmond, Penn wrote, 'There is no god,' and Teller wrote, 'He's right.'"