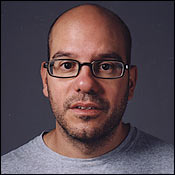 It was on this date, April 4, 1964, that American actor and stand-up comedian David Cross was born. Known chiefly for his HBO sketch comedy series “Mr. Show,” and his role as Tobias Fünke in the Fox sitcom “Arrested Development,” Cross was born in Atlanta, Georgia, and after an unsettling childhood began performing stand-up comedy at 17. His style evolved to one blending liberal-leaning political commentary with satire by the time he recorded his first HBO comedy special, “The Pride Is Back.” Cross won an Emmy for his work on “The Ben Stiller Show” in 1993 and co-created the HBO sketch comedy series “Mr. Show” in 1995. His 2002 stand-up recording, Shut Up, You Fucking Baby!, was nominated for a Grammy Award for Best Comedy Album.

A non-practicing Jew, during the March 9, 1998, “Politically Incorrect” hosted by atheist Bill Maher on ABC, Cross said “I was born Jewish, but I am an atheist. I don't believe in God.” On Cross’s standup comedy album, Shut Up, You Fucking Baby!, he says, “I’m an atheist, and I was at an early age” and “The Bible truly is one of the funniest books I’ve ever read. ... It was written thousands of years ago, when people were even dumber than they are today. ... It’s absurd to believe in that shit.” In his 2004 standup comedy album, It’s Not Funny, Cross does a bit which begins, “Oh, so I was watching that show … the show where the, uh, there’s the guy on stage and then everybody in the audience believes that he, uh, has contact with the dead and spirits talk to him” – someone in audience shouts, “The Other Side?” “Crossing?” “No, no, no, no,” says Cross, “it was church.”