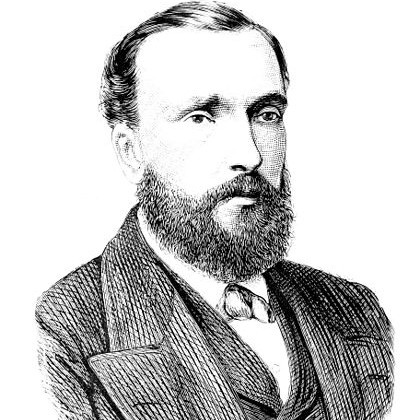 It was on this date, April 26, 1837, that English physiologist and neurologist Henry Charlton Bastian was born in Truro, Cornwall. He graduated with an M.B. from the University of London in 1861. Bastian married in 1866 and eventually produced three sons and a daughter. He was professor of the Principles and Practice of Medicine at London University 1867-1887 and Censor of the Royal College of Physicians 1897-1898. He was one of the first neurologists appointed to the National Hospital, Queen Square, from 1868-1892. Bastian was elected as a Fellow of the Royal Society in 1868. To the end of his life he was a champion of spontaneous generation (abiogenesis) of living organisms out of dead material – even defending it against Louis Pasteur, Robert Koch and John Tyndall – with the dubious distinction of being the last believer in the scientific world. However, in defending the erroneous theory, Bastian managed to help advance the germ theory of fermentation and of disease by pointing out many of their mistakes.

At a time when it was thought that speech was controlled by independent brain centers, Bastian was the most important of those who represented this view by means of diagrams resembling electrical circuits. He described a visual and an auditory word center in the brain, and in 1869 he gave the first account of “word blindness” (alexia) and of “word deafness.” In his notice in the Complete Dictionary of Scientific Biography (2008), Edwin Clarke summarizes, “Of Bastian’s industry, tenacity, logic, and experimental versatility—although perhaps misplaced—there can be no question.” Indeed, Bastian was an aggressive materialist. This can be seen in his Brain as the Organ of Mind (1880) and other publications in clinical neurology wherein he takes a materialist view of the causes of paralysis and aphasia. Henry Charlton Bastian died on 15 November 1915 in Chesham Bois, Buckinghamshire.

Rupert Brooke (1887) It was on this date, August 3, 1887, that the Edwardian British poet W.B. Yeats called "The most handsome man in England," Rupert Brooke was born in Rugby. He was educated at Rugby School (where his father was housemaster) and King's College, Cambridge, distinguishing himself as both student and athlete. He was […]