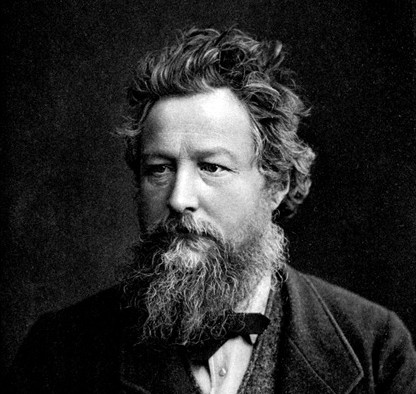 It was on this date, March 24, 1834, that English poet, artist, writer, and libertarian socialist William Morris was born in Walthamstow. As a youth he was an avid reader and at Oxford he was a zealous student of theology, ecclesiastical history medieval poetry and art. From there he was expected to join the Roman Catholic Church, but instead founded a “Brotherhood” to produce religious art. This enterprise evolved to produce house decoration and beautiful books.

By the 1870s, Morris was actively interested in politics, first as a Liberal in the National Liberal League, then moving on to Socialism. By 1883, he had joined the Socialists, co-authored the Social Democratic Federation manifesto and abandoned his religious faith – writing to fellow poet William Allingham, “It’s so unimportant, it seems to me.” The next year (1884) he joined the Socialist League. In 1890, Morris published the utopian Marxist novel News from Nowhere (or An Epoch of Rest) and other socialist works. He was an aggressive atheist, sometimes reciting aloud, with great pleasure, an unpublished scurrilous couplet of Algernon Charles Swinburne’s on the Trinity (according to socialist journalist Ernest Belfort Bax).

Never leaving his artistic side behind, Morris’s 1896 Works of Geoffrey Chaucer (Kelmscott Press, which he founded in 1891) is considered a masterpiece of book design. William Morris died in London on 10 April 1909.

I've got my own religion... If I get into trouble, there's no God or Allah to sort me out. I have to do it myself.