Waiting for Papa: Watching for the Smoke (and Mirrors) 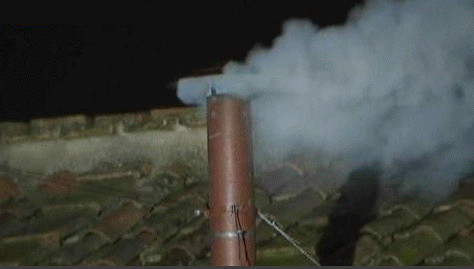 The news coverage of choosing another pope to replace the retired Pope Benedict XVI, while amusing to the nonreligious (among which I count myself), lacks some essential historical background. I’m not talking about Benedict (aka Joseph Aloisius Ratzinger) being the first Pope to leave the chair of St. Peter not inside a box since Pope Gregory XII in 1415, and the first to do so on his own initiative since Pope Celestine V in 1294, or of his fresh replacement, 76-year-old Jorge Mario Bergoglio of Buenos Aires, aka Pope Francis, the first non-European Pope since the 8th century and the first ever from the New World.

What’s missing from the narrative and background is some historical perspective on the papacy itself. For example, because the office was always political, there were numerous popes who died of non-natural causes: from 800-1100, arguably the age of strongest faith, there were 89 popes, or a new pope every 3-4 years. The child sex abuse scandal that still rocks the church is nothing new: it was a grave problem in Germany from the mid-1930s, but was overshadowed by some larger troubles in that country. The scandal has been following the Roman Catholic Church since at least the Middle Ages, especially among the cloistered folk.

But one of the biggest misconceptions about the papacy is that the center of authority in the Church has always resided in the Bishop of Rome, that is, the Roman Pope. Often we hear the words of Augustine, “Rome has spoken,” as the way matters were always closed by the Pope in Rome. But this is not even close to being true.

Setting aside the claim that the Roman Church is a shining example of democracy because popes are elected and not hereditary – you can see the irony in, first, the Pope being a monarch, second, the electors being only Cardinal-Electors, and third, the clergy not being allowed to marry, anyway (at least since Lateran II in 1139) – in the beginning, every bishop of the Church was a pope (literally papa, or “father”). That is, every diocese in every part of the late Roman Empire was administered by a bishop (episcopos or “overseer”) who had every right to call himself a pope.

More important, the bishop at Rome did indeed try to claim power and authority over the entire body of the Catholic Church – and he was rebuffed every time! You read that right: from about 190-290 CE, every time the bishop of Rome tried to speak with authority for the entire Church, the other bishops told him to stuff it! Pope Victor (189-199 CE) tried to dictate policy to the churches in Asia Minor (based on the biblical interpolation that has Jesus founding his “church” on the “rock” of Peter). Bishop Eusebius records that the Asiatic bishops rejected his claim and “bitterly reproached Victor.” Tertullian also sarcastically refers to the pope at Rome as claiming to be “the Supreme Pontiff, that is to say, the Bishop of Bishops.”

It would be another 50 years before the Roman bishop would try again to claim authority over the whole Church. Pope Cornelius (251-253), and later Pope Stephen (254-257) tried to dictate to the African bishops. Cyprian, head of the African Church at Carthage, shot back with scorn in letters (54, 67 and 72) a repudiation laced with irony, saying in the name of the 80 African bishops, “None of us regards himself as the Bishop of Bishops or seeks by tyrannical threats to compel his colleagues to obey him.”

In 340 CE, Pope Julius (337-352) attempted to give orders to the Eastern bishops, whose reply was “full of irony and not devoid of serious threats” (according to the ecclesiastical historian Sozomen, ca. 400-450). In 382, Pope Damasus (366-384) drew an equally disdainful response to the same demand for obedience. Augustine himself (354-430) did not recognize the authority of Rome on doctrinal matters.

In 445 Leo I (400-461) tried to assert the supremacy of Rome and, even with the African Church unraveling under the invasions of the Vandals, still the claim was blasted in “language which no layman even should dare to use and no priest to hear,” wrote Leo. Indeed, until the fall of the Western Empire in the 5th Century, every assertion of Roman supremacy was repudiated. After that, resistance was futile.

So when you see the white smoke signal from the Sistine chimney, know that the Roman Catholic Church relied not on moral suasion, but had bullied its way to preeminence. As it was truly said by Thomas Hobbes, who even in his 1651 Leviathan recognized the essential irrelevance of the church as “the ghost of the deceased Roman Empire sitting crowned upon the grave thereof.”