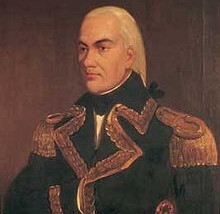 It was on this date, March 28, 1750, that Venezuelan soldier Francisco de Miranda was born Sebastian Francisco de Miranda in Caracas into a wealthy family of the Canary Islands. Consequently, Miranda was able to afford the best education and, in 1771, bought himself a commission as a Captain in the Spanish Army. Becoming interested in the American Revolution, Miranda participated in the 1781 Siege of Pensacola, the culmination of Spain's conquest of the British province of West Florida, and in the 1782 Capture of The Bahamas. For the latter victory, his Spanish masters imprisoned Miranda for not asking first for permission, later releasing him, but this soured the then-Lieutenant Colonel Miranda, who thereafter conceived the idea of liberating the Spanish-American colonies.

In 1783, he returned to America, where he met, among others, George Washington, Thomas Paine, Alexander Hamilton, Henry Knox, and Thomas Jefferson. He met with the president of Yale University in New Haven, Connecticut, where in discussing the Sunday Blue Laws with him, fell into disagreement: Miranda believing the American Revolution would not be complete until all barbaric, religion-based laws were eliminated and the Yale president disagreeing. From Boston, Miranda sailed for England. There, in 1790, he plied some British Cabinet ministers with his ideas about the independence of Spanish territories in South America. From 1791, Miranda took an active part in the French Revolution, befriending the Girondists and fighting in the 1792 campaign in the Low Countries. But Miranda was arrested twice by the Revolutionary government in 1793, imprisoned until his release in early 1795 and, becoming disillusioned at the course the French were taking, escaped to England in 1798. There he seriously plotted the liberation of South America and created a plan for a Columbian empire with a bicameral legislature. In 1805-1806, Miranda met privately with President Thomas Jefferson and his Secretary of State James Madison, who offered their sympathy but could not help him without violating the 1793 Proclamation of Neutrality.

From 1806-1810, after some setbacks, Miranda successfully liberated Venezuela and, on 5 July 1811, formally declared Venezuelan independence and established a republic under a flag of his design. But by 1812, due to economic chaos brought on by a disruption with Venezuela’s main trading partner, Spain, and to some coincidental earthquake activity that played into the religious/superstitious convictions of the middle and lower classes and even some in his army, Miranda was forced to negotiate an armistice and attempt to leave the country for England. However, his former ally, Simón Bolívar, in an act some would consider morally dubious, claimed this act as treasonous and handed over Miranda to the Spanish Royal Army. Miranda spent his remaining years (1812-1816) in a Spanish prison reserved for victims on the Inquisition, located outside Cadíz. He died there at age 66, while his case was still being processed, on 14 July 1816, and buried in a mass grave – which is why his tomb in the National Pantheon of Venezuela is empty.

Within fourteen years of his death, however, most of Spanish America was independent. His name is carved into the Arc de Triomphe in Paris and a statue honoring Francisco de Miranda stands in Fitzroy Street, London and in Caracas, Venezuela. Aside from these tributes, Miranda’s legacy includes being a follower of the Utilitarian philosophy of Jeremy Bentham as well as being an atheist. The English philosopher John Stuart Mill, also a Benthamite, credited the conversion to skepticism of his father, Scottish historian, economist, political theorist, and philosopher James Mill (1773-1836) to Francisco de Miranda.