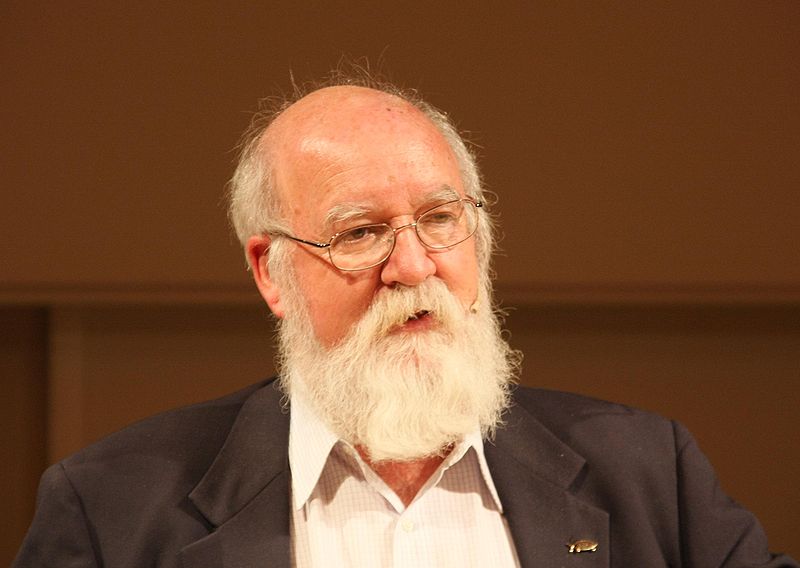 It was on this date, March 28, 1942, that American philosopher, writer and cognitive scientist Daniel Clement "Dan" Dennett III was born in Boston, Massachusetts. Although a researcher on the philosophy of mind, the philosophy of science and the philosophy of biology, Dennett is chiefly known, along with Richard Dawkins, Sam Harris, and the late Christopher Hitchens, as one of the “Four Horsemen of New Atheism.” He earned a BA from Harvard in 1963 and a Ph.D. in philosophy from Oxford. He was named 2004 Humanist of the Year by the American Humanist Association. In 2010, he was named to the Freedom From Religion Foundation's Honorary Board of distinguished achievers. In 2012, “for his ability to translate the cultural significance of science and technology to a broad audience,” Dennett was awarded the Erasmus Prize.

If you want to teach your children that they are the tools of God, you had better not teach them that they are God's rifles, or we will have to stand firmly opposed to you: your doctrine has no glory, no special rights, no intrinsic and inalienable merit. If you insist on teaching your children false-hoods—that the Earth is flat, that "Man" is not a product of evolution by natural selection—then you must expect, at the very least, that those of us who have freedom of speech will feel free to describe your teachings as the spreading of falsehoods, and will attempt to demonstrate this to your children at our earliest opportunity. Our future well-being—the well-being of all of us on the planet—depends on the education of our descendants.

Dennett has said, “You don't get to advertise all the good that your religion does without first scrupulously subtracting all the harm it does and considering seriously the question of whether some other religion, or no religion at all, does better.” And, in Breaking the Spell: Religion as a Natural Phenomenon (2006), he wrote “People are afraid of being more ignorant than their children – especially, apparently, their daughters.”

Politically, Dennett is a Libertarian... with a full beard. Philosophically, Dennett believes that free will and determinism are compatible ideas, that is, it is possible to believe both without being logically inconsistent (compatibilism). He is also an empiricist, accepting no claims unfounded on evidence. But he indulges a certain degree of self-deprecation: “A philosopher is someone who says, ‘We know it's possible in practice; we're trying to work out if it’s possible in principle!’” Dennett has done research on clerics who are secretly atheists and how they rationalize their continued work in the God industry when they no longer believe. His other chief works are Brainstorms (1981), The Mind's I (1985), Consciousness Explained (1992) and with Alvin Plantinga Science and Religion (2010). It was Daniel Dennett who said in 2003, “I think religion for many people is some sort of moral Viagra.”

The Week in Freethought History (December 23-29)