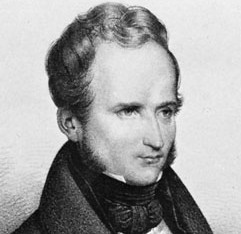 It was on this date, March 27, 1797, that French poet, playwright, and novelist Alfred de Vigny was born into an aristocratic family in the town of Loches in central France. His mother, a woman of strong will inspired by Jean-Jacques Rousseau, saw to his early education. Although the French Revolution left the family in reduced circumstances, and his father, a veteran of the Seven Years’ War, died about this time, the restoration of King Louis allowed Vigny to enroll in one of the privileged companies of the Maison du Roi. Vigny served in the king’s army for a dozen years but, being well read in French history and the Bible, he began to write poetry, publishing his first volume of verse before he was thirty. This collection, Poèmes antiques et modernes, and his historical novel, Cinq-Mars, made his reputation as a writer in France.

Marcel Proust regarded Vigny’s La Maison du berger as the greatest French poem of the 19th century. Vigny was friends with Victor Hugo but, unlike the more famous writer, retained royalist sympathies. In his early work, he shows a sentimental or romantic regard for Christianity, but in his mature poetry, Vigny rises to agnosticism. For example, in his 1862 esoteric poem, “Silence,” we read,

If it is true that in the sacred Garden of the Scriptures,
the Son of Man said what we see reported;
mute, blind and deaf to the cry of all creatures,
if Heaven abandons us like an aborted world,
the just will oppose disdain to this absence,
and will answer from now on with only cold silence
the eternal silence of the Divinity.*

After rejecting him five times, Vigny finally won a place in the académie française in 1845. Alfred de Vigny died in Paris on 17 September 1863, a few months after the death of his wife. They had no children.