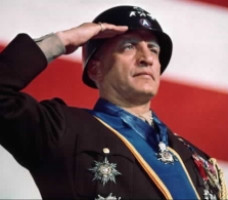 It was on this date, October 18, 1927, that American actor George C. Scott, winner of four Oscar nominations, was born George Campbell Scott in Wise, VA. Generally considered an actor’s actor, and known for his distinctive raspy voice, Scott was nominated for Broadway’s Tony Award five times and created memorable film characters in Anatomy of a Murder (1959) and The Hustler (1961), for which he won his first two Oscar nominations, The List of Adrian Messenger (1963), then Dr. Strangelove (1964) the title role in Patton (1970) and Ebenezer Scrooge in the Clive Donner adaptation of A Christmas Carol (1984). It was for Patton that Scott won, but refused, the Academy Award for Best Actor. He was the first actor ever to refuse the award.

Shortly before his death on 22 September 1999, during an interview on the TV news magazine “60 Minutes,” Scott said he did not believe in God at all.

Here’s your Week in Freethought History: This is more than just a calendar of events or mini-biographies – it’s a reminder that, no matter how isolated and alone we may feel at times, we as freethinkers are neither unique nor alone in the world. Last Sunday, December 9, but in 1953, American actor John Malkovich […]