This Week in Freethought History (April 22-28)

(The following is a transcript of a LIVE broadcast by John Mill. “This Week In Freethought” airs on the American Heathen® internet radio show. Air date of this particular segment: 04/28/12)

Last Sunday, April 22, marked a birthday and an anniversary—

It’s American actor Jack Nicholson’s 75th birthday (1937). Nicholson has been nominated 12 times for Academy Awards, winning for Best Actor in One Flew Over the Cuckoo's Nest (1975) and in As Good as It Gets (2003). For Terms of Endearment, Nicholson won Best Supporting Actor (1983). In an 1992 interview in Vanity Fair magazine, Nicholson said, "I don't believe in God now," but he added, "I can still work up an envy for someone who has a faith. I can see how that could be a deeply soothing experience." This quote might have informed the screenwriter of Nicholson’s 2007 film, The Bucket List, in which Nicholson’s character says, “I envy people who have faith, I just can't get my head around it.” 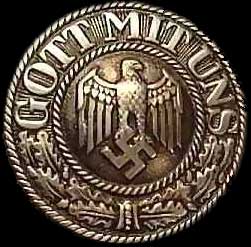 And 148 years ago last Sunday the US Congress passed an act requiring coins, for the first time since the nation was founded, to include a recognition of God (1864). Replacing the Latin motto, E Pluribus Unum – “Out of many, one” – was one that everyone could read, if not subscribe to: “In God We Trust.” How did this happen? A Rev Watkinson urged replacing the Goddess of Liberty with a religious slogan on US coinage, writing to Treasury Secretary Salmon P. Chase, “You are probably a Christian” … “Would not the antiquaries of succeeding centuries rightly reason from our past that we were a heathen nation?” A religious slogan, wrote the cleric, “would relieve us from the ignominy of heathenism. This would place us openly under the Divine protection we have personally claimed.” And even though the motto was conceived by a cleric, recommended for its religious purpose, and adopted precisely to acknowledge the Judeo-Christian God, several federal courts have since ruled that “In God We Trust” on our coins – and, since 1954, our currency, is not a religious phrase! What’s troubling is that Nazi Germany had a very similar motto: Gott mit uns (“God with us”). We can suppose the Nazis, too, have been spared the “ignominy of heathenism”!

It was last Monday, April 23, that German physicist Max Planck was born (1858). Planck invented quantum theory and developed a formula to predict how the radiation an object emits is related to its temperature, known today as Planck’s Constant. Planck received the Nobel Prize for Physics in 1918. Though publicly he wrote (1932), “Religion belongs to that realm that is inviolable before the law of causation and therefore is closed to science,” one biographer observed that Planck was “far removed from all dogmatic, mystery-mongering beings.” Planck’s God, it seemed, was nothing more than an “ideal Sprit.” His beliefs could be described as pantheist, but certainly not Christian. Planck did not believe in a future life.

It was last Monday, April 23, 448 years ago, that the greatest poet and playwright in the English language, William Shakespeare, was baptized, so this is taken as his birthday (1564). Shakespeare is known to be the author of about 38 plays, 154 sonnets, two long narrative poems, and several other poems. Because few records of Shakespeare’s private life survive, scholars have freely speculated about his religious beliefs. Whereas some scholars suggest The Bard may have been an atheist, and even the Catholic Encyclopedia wonders if “Shakespeare was not infected with the atheism, which was rampant in the more cultured society of the Elizabethan age,” all we can say with certainty is that, in a time when it was a serious offense to be an unfaithful Christian and to skip church services, William Shakespeare said some things no Christian should have said and failed to do some things that a Christian should have done.

Last Tuesday, April 24, was the 212th anniversary of the founding of the world’s largest library, the Library of Congress (1800). The Library’s current collection of 147 million items includes materials in 460 languages, including books, maps, monographs, dissertations, periodicals, voice and music recordings, and 14 million images. The Library of Congress is the largest library ever to exist. The collection and recording of the sum of human knowledge for the betterment of humankind was not a high priority in the Ages of Faith in Christian Europe, or for most of the history of the Muslim East. The idea of human progress was a secular humanist achievement. It is therefore dishonest to crow about the great libraries of the Middle Ages, and the romantic fiction of the monks preserving the classics, without telling us just how many volumes these great Christian libraries comprised. In the solidly Christian period of 500 to 1300, not a library can be found in all of Europe with more that 2,000 volumes, many of them copies of the same title. In the greatest abbey of the 13th century, the Abbey of St. Gall, not a single monk could read! 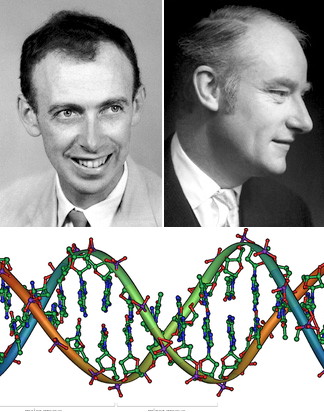 Last Wednesday, April 25, was the 59th anniversary of the article published in Nature magazine describing the structure of DNA in terms of the now-familiar double helix – by James D. Watson and Francis Crick (1953). True scientists both, they characterized their discovery as a scientific theory, meaning that their assertion is not only subject to independent verification, but also innately falsifiable. Both won the Nobel Prize in 1962. Francis Crick published a book, The Astonishing Hypothesis (1994), in which he states, “The Astonishing Hypothesis is that You, your joys and your sorrows, your memories and your ambitions, your sense of personal identity and free will, are in fact no more than the behavior of a vast assembly of nerve cells and their associated molecules.” In 1996, Richard Dawkins interviewed James Watson for a film broadcast by the BBC and asked if Watson knew many scientists with strong religious convictions. “Virtually none,” said Watson. “Occasionally, I meet them and I’m a bit embarrassed because I can’t believe that anyone accepts truth by revelation.” 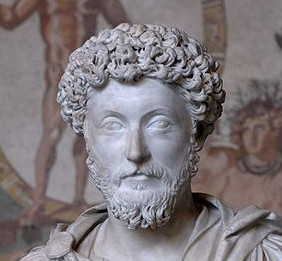 Last Thursday, April 26, was the 1,891st birthday of the 16th Roman Emperor, Marcus Aurelius Antoninus (121). Marcus had the bad fortune to inherit the Empire during a dangerous age. And it was to Marcus that the Christian apologists Justin Martyr (103-165) and Athenagoras of Athens (133-190) defended Christianity (Apology, 176/177). But Marcus had no patience with any kind of superstition, saying, “I learned from Diognetus not to give credit to what was said by miracle-workers, and about the driving away of demons and such things.” It is instructive to note that the Christians had to defend themselves against the charge of atheism, not because they believed in no god, but because they believed in the wrong god! Marcus Aurelius didn’t believe in immortality and, in his Meditations, written in Greek, he conspicuously neglects the idea of a supreme being. The Meditations are still read today, but the apologetics of Justin and Athenagoras are not.

Yesterday, April 27, was the birthday of two famous Freethinkers— 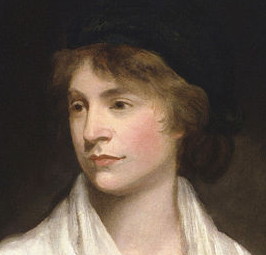 It was on April 27, 253 years ago, that English feminist and radical Mary Wollstonecraft was born (1759). She was largely self-educated and an unusual student, with the radical idea that women should be educated on a par with men. Wollstonecraft found she had a talent for writing, and publishers to promote her, so she published her theories in Thoughts on the Education of Daughters (1786). She continued to argue that the rights of men and the rights of women were the same rights. This culminated in her Vindication of the Rights of Woman in 1792, the seminal document in the history of modern feminism. Wollstonecraft associated with a radical intellectual group including Thomas Paine and William Godwin. She married Godwin and, in 1797, died of complications associated with childbirth – ten days after she gave birth to the future author of the classic novel Frankenstein.

It was also on April 27, but 190 years ago, that the 18th President of the United States, Ulysses S. Grant, was born (1822). At the close of the American Civil War, the commanding general of the U.S. armies was the most popular man in the country. He was elected president and served two terms, from 1869-1877. However, his administration was marred by a tolerance of corruption, so that he left office as unpopular as he was popular when first elected. Grant was not a member of any church. He was, however, a staunch defender of church-state separation. In a speech in Des Moines, Iowa, in 1875, he unequivocally supported public schools over religious schools, saying, “Encourage free schools, and resolve that not one dollar of money be appropriated to the support of any sectarian school… Leave the matter of religion to the family altar, the Church, and the private schools, supported entirely by private contributions. KEEP CHURCH AND STATE FOREVER SEPARATE.” 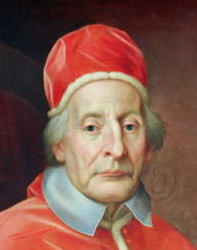 It was on April 28, 274 years ago, that Pope Clement XII issued the first papal decree against the Freemasons (1738), an organization of obscure origins, possibly a survival of the Ancient Roman guilds or unions that supported the craft and its members. Modern Freemasonry dates only from 1717, with the formation of the Grand Lodge of England. Clement’s condemnatory Constitution insisted on the objectionable character of societies that commit men of all or no religion to a system of mere natural righteousness, without reference to Mary or Jesus or even the Pope. It wasn’t until 1877 that the French variety of Freemasonry cut out references to the “Grand Architect” and, consequently, declined to require a belief in God or immortality. This caused a split between the English-speaking and the French-speaking lodges. 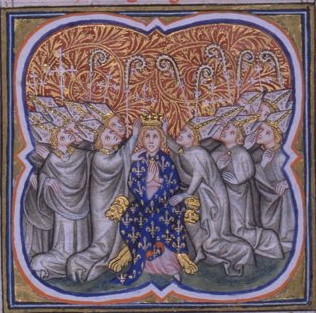 It was on April 28, but 1150 years ago, that the bishops of Lorraine, in the 3rd Synod of Aachen, approved a divorce between King Lothair II and his wife Teutberga, so that he could marry Waldrada and get an heir (862). This pretty much puts the lie to the Roman Catholic Church’s claim of taking a hard line on the “indissolubility of marriage.” There is no evidence from pre-Christian times that allowing divorce led to evil or even immorality, and plenty of evidence from the Christian era that the reverse is true. The Church really only began to impede divorce in the 9th century, and it wasn’t until the 11th century and the time of Pope Gregory VII (Hildebrand) that marriage and divorce were really regulated, along with the celibacy of the clergy. Nobody took to well to either innovation. Divorce was finally, after a long struggle, officially forbidden by the Council of Trent, 1545-1563. But there were always ways around that, if not by legalisms making the marriage null and void in the first place, which became a vast profit center for the Church; then by lack of “internal consent”; or by threat of force, as King Henry VIII learned. This affected the morals of Europe by ushering in about two centuries of adultery, natural and unnatural vice, and flagrant prostitution – until the Age of Reason arrived and shamed the heads of church and state into curtailing these excesses.