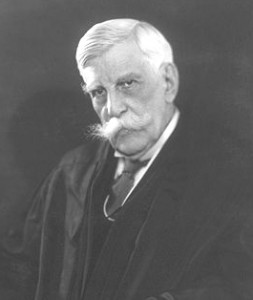 It was on this date, March 8, 1841, that The Great Dissenter on the US Supreme Court, Oliver Wendell Holmes Jr was born. His distinction as The Great Dissenter arose from many legal dissents issued on the Supreme Court that nevertheless were incorporated into common law. Holmes once wrote (in dissent): “the best test of truth is the power of the thought to get itself accepted in the competition of the market, and that truth is the only ground upon which their wishes safely can be carried out.” Throughout most of his legal life, his religious opinion can be said to have been Unitarian. It was Holmes who said to a reporter on his 90th birthday, “Young man, the secret of my success is that at an early age I discovered that I was not God.”

Kurt Vonnegut Jr (1922) It was on this date, November 11, 1922, that science fiction and satire writer Kurt Vonnegut was born in Indianapolis, Indiana. Vonnegut enrolled at Cornell University as a biochemistry major, but left for the Air Force during World War Two. He was captured in May 1944 during the Battle of the […]