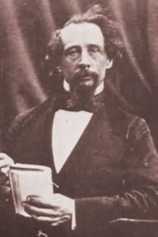 It was on this date, February 7, 1812, that the greatest novelist in the English language, Charles Dickens, was born in Landport, Hampshire, England. While his father was in Marshalsea debtor’s prison for living beyond his means, Dickens interrupted his education to work in a bootblacking factory. He later completed his education with self-education and worked variously as a law clerk and a shorthand reporter. It was his skill in shorthand, and his keen powers of observation of speech and character, that helped Dickens draw such vivid characters in his novels. All of Dickens’ novels are characterized by attacks on social evils, injustice, and hypocrisy. This extended to religious hypocrisy, as well. While he was devout in his own way, Dickens typifies the romantic regard for religion coupled with a disdain for its theology.

For sure, it was "just a theory," as creationists like to dismiss the theory of evolution, even though this Copernican theory was as unassailable as science as heliocentricity was dangerous to theology.