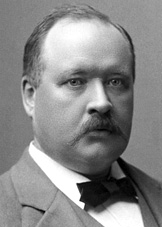 It was on this date, February 19, 1859, that Swedish chemist and Nobel laureate Svante August Arrhenius, one of the founders of the science of physical chemistry, was born in Vik. Popular story relates that Arrhenius taught himself to read at the age of three, and became a mathematics prodigy in childhood. He studied at a cathedral school as a child, but couldn’t keep his mind on the heavens. In 1905, German biologist and naturalist Ernst Haeckel (1834-1919) founded a group called the “Monist League” to promote his religious and political beliefs. The League was the German equivalent of the British Rationalist Press Association, that is, it attracted atheists and agnostics. Svante Arrhenius was a member in good standing up to his death on 2 October 1927.