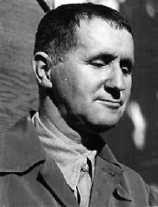 It was on this date, February 10, 1898, that German dramatist Berthold Brecht was born in Augsburg, Bavaria, the product of a Catholic father and a Protestant mother. Being attracted to Socialism and to theater, Brecht combined the two and became a leading reformer on the 20th century stage.
Brecht wrote in his Diaries, “The church is a circus for the masses,” and believed organized religion had been standing in the way of progress for centuries…

In a note to Donny and Marie Osmond, Penn wrote, 'There is no god,' and Teller wrote, 'He's right.'"