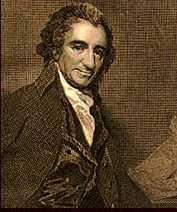 It was on this date, January 29, 1737 (N.S February 9), that English-born American patriot and pamphleteer Thomas Paine was born in Thetford, Norfolk, into an English Quaker family. He worked as a stay-maker for women’s dresses, and as an excise-man, but in London Benjamin Franklin persuaded the budding writer to emigrate to America. As a soldier in George Washington’s army, Paine witnessed the struggle for independence for himself and penned Common Sense, which made him so popular that the title became Paine’s nickname.