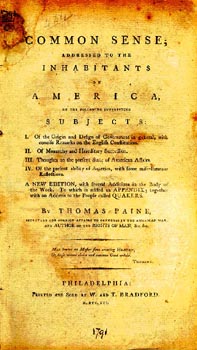 It was on this date, January 10, 1776, that an anonymous pamphlet called “Common Sense” was published in the American colonies, authored by English-born citizen Thomas Paine. It became so popular that Paine himself was often called “Common Sense.” In effect, Thomas Paine, a Deist who denied the divinity but not the morality of Jesus, made a declaration of independence before Jefferson ever put those words on paper.