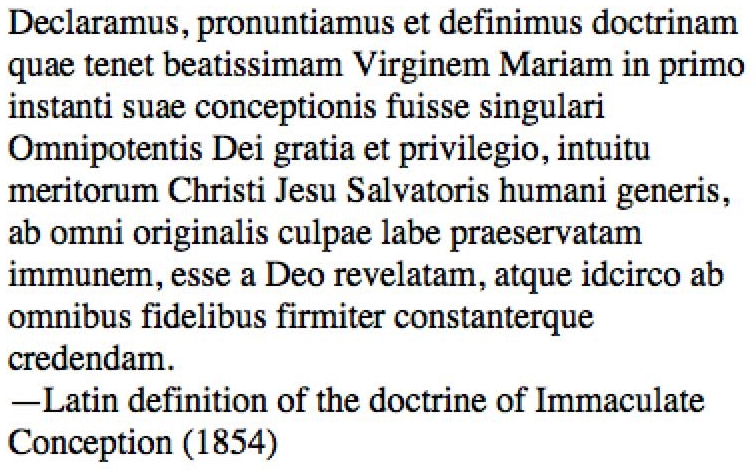 It was on this date, December 8, 1854 – that the same Pope Pius IX promulgated, in the bull Ineffabilis Deus, the doctrine of the Immaculate Conception. Not to be confused with the "virgin birth" legend of Jesus, this equally absurd doctrine says that, at Mary's conception, she did not inherit the guilt of the sin of Adam known as Original Sin.

Articulated in the Genesis legend of the Fall of Man, all humans inherited God's curse on Adam, the Original Sin. This can be relieved only through Christian baptism. The ideas of inherited sin and eternal punishment would seem to make the Christian religion an inferior creed to the many circulating in the Greek-Roman world in the beginning centuries of the Christian Era. Most other religious systems, not to mention legal systems, would never prescribe infinite punishment for finite offenses. Similarly, to maintain that guilt is carried from father to son, generation upon generation, is absurd on its face.

"The Fall of Man" by Michelangelo

Charles Bradlaugh (1833) It was on this date, September 26, 1833, that Charles Bradlaugh was born in Hoxton, London. At the age of twelve his father's employer hired him on as an office boy. But Bradlaugh began reading the writings of Richard Carlile, who had been imprisoned under English law for blasphemy and seditious libel […]