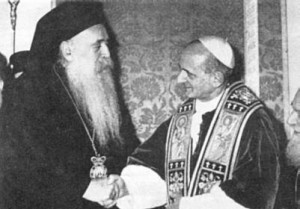 It was on this date, December 7, 1965, that Roman Catholic Pope Paul VI and Greek Orthodox Patriarch Athenagoras I (Αθηναγόρας Α’) simultaneously lifted the 900-year-old mutual excommunications that led to the split of their two churches in 1054. An excommunication in the Dark Ages actually meant something, whereas today it would be a laughing matter. That’s progress. But even in the 11th century, the power of the Roman Church to punish heresy was employed with a political tone-deafness, and a preference for instant gratification over the long-term interests of the Church, that was repeated with similar loss for the Church in the excommunication of King Henry VIII.