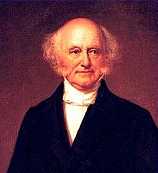 It was on this date, December 5, 1782, that the 8th President of the United States (4 March 1837 – 4 March 1841), and the first US President born in the United States, Martin Van Buren, was born in New York. Of Dutch ancestry, he attended the Dutch Reformed Church. A protégé of Aaron Burr and the Vice President to Andrew Jackson, during Van Buren’s one-term presidency he attended the Episcopal church in the neighborhood of the White House.