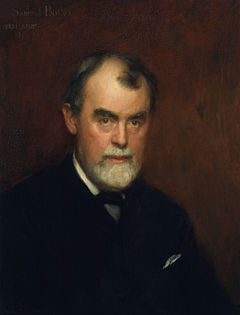 It was on this date, December 4, 1835, that British writer Samuel Butler was born in Upton upon Severn in Langar Rectory, near Bingham, Nottinghamshire, England. Being the son and the grandson of clergymen, Butler began to study along the same lines, but in 1859 he refused to be ordained, traveled to New Zealand, and established a sheep farm with some success. He returned to London in 1864 and, while dabbling in music, biology and painting – he exhibited some of his paintings at the Royal Academy (1868-76) – took to literature. He published his first novel, Erewhon, (the title is the word “nowhere” spelled backwards) in 1871.