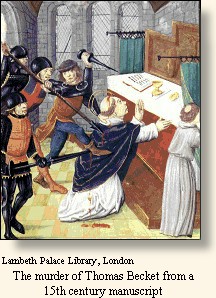 It was on this date, December 29, 1170, that four knights of King Henry II burst into Canterbury Cathedral and murdered Archbishop Thomas Becket. The story of the stormy breakup between king and cleric has been the subject of a play by T.S. Eliot (Murder in the Cathedral, 1938) and one by Jean Anouilh (Becket, 1959), as well as an award-winning 1964 film, Becket.

Richard Wright (1908) It was on this date, September 4, 1908, that African-American writer Richard Wright was born outside Natchez, Mississippi, the son of an illiterate sharecropper father and a well-educated school teacher mother. Early on, Wright developed a fascination with books – a love of learning that only deepened his dissatisfaction with life as […]