December 18: Pius XII, Optatissima Pax (1947) and the Powerlessness of Prayer 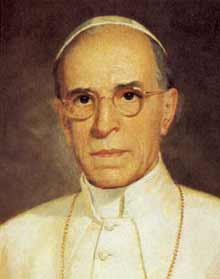 It was on this date, December 18, 1947, that Pope Pius XII, in the ninth year of his papacy, promulgated the encyclical Optatissima Pax, On Prescribing Prayers for Peace. This was timed well, for World War Two had ended just two years earlier. And Pius was the same pope, born Eugenio Pacelli, whose tepid and infrequent condemnations of Hitler and the Nazis, while somewhat successful, only show that had he condemned the atrocities more forcefully and more frequently, millions of Jewish lives could have been saved.

Turner ridicules the idea of "hell," believes "nature is god" and rejects the biblical concept of creation.