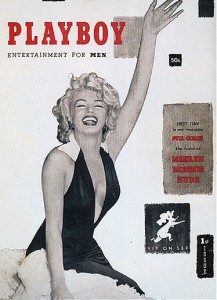 It was on this date, December 10, 1953, that the first issue of Playboy magazine was published, undated, by 27-year-old Chicago-born entrepreneur Hugh Marston Hefner. A former promotional copywriter for Esquire magazine, Hugh Hefner begged, borrowed and invested $7,600 to print his first issue – undated because he wasn’t sure there would be a second issue – and included in it a now-classic, nude calendar photo of actress Marilyn Monroe. Fifty-thousand issues of the first Playboy sold nationwide, assuring that there would indeed be a second issue. Quipped Hefner, years later, “If there was going to be a sexual revolution, I would be its pamphleteer.”