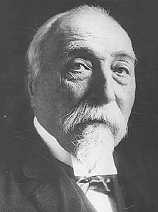 It was on this date, November 8, 1904, that leftist French statesman Émile Combes introduced a bill for the separation of Church and State into the legislature of France. Born Justin Louis Émile Combes in Roquecourbe in the Tarn Départment on 6 September 1835, Combes at first studied for the priesthood. After becoming a Doctor of Divinity in 1860, Combes taught philosophy in Catholic schools, but abandoned the Church before ordination. He earned a doctorate in letters in 1860 before turning to medicine, taking his medical degree in 1867.

Winning a senate seat in 1885, Combes concentrated on education reform, serving as Minister of Public Instruction from 1895-1896. Then, in 1902 he led the struggle against the strangulation of public education by the Catholic Church, serving as Minister of the Interior and Premier from 1902-1905. Not surprisingly, the Conservative and Catholic parties aggressively opposed him, claiming (as conservatives do in America today) that secularization of the schools is persecution of religion. Combes applied strictly the laws already passed in 1901 regulating religious associations, ending on 9 December 1905, with adoption of the law implementing the separation of the Church and the State. This nullified the 1801 Concordat with the Vatican giving the Catholic Church exclusive control over the minds of children.

Many of his Rationalist friends thought he was too lenient on the churches, but the Catholic factions in France denounced Combes bitterly. Émile Combes died on 25 May 1921. In October 1928 a statue of Combes at Pons was defaced by a Catholic mob. Although under attack even today, with resistance to the ban on overtly religious garb in public schools, the French government has held the Church and State separate ever since.