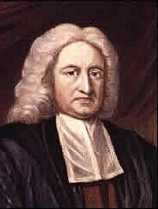 It was on this date, November 8,* 1656, that British astronomer Sir Edmond Halley was born in Hagerston, Middlesex, England (now London), the son of a wealthy merchant. He was educated at Oxford and before graduating took his first astronomical field trip in 1676, to the British-controlled island of St. Helena, where Napoleon would be exiled 139 years later.

Halley was bright enough to help Isaac Newton to complete and publish his Principia, but too irreligious for the comfort of John Flamsteed. The incumbent Royal Astronomer prevented his appointment as Savilian professor of geometry at Oxford in 1691, but Halley eventually took the chair in 1704. The next year, he published his Astronomiae Cometiae Synopsis, which included his prediction for the return of a comet he observed in 1682 – and which records had shown appearing in 1531 and 1607 before that – a comet which has become known as "Halley's Comet."

After Rev. Flamsteed's death, the man the good Christian astronomer torpedoed for an Oxford professorship succeeded him as the second Royal Astronomer in 1720. Halley was then age 64, and held this position for 21 years. Halley does not discuss religion in his writings, but continued to publish until he died on 14 January 1742 in Greenwich, England at age 87. Chalmers's Biographical Dictionary says of Sir Edmund Halley, "That he was an infidel in religious matters seems as generally allowed as it appears unaccountable."

* Halley's birth date is somewhat uncertain because it is not known if at his time in his village the Gregorian or the Julian calendar was in use. There is also some dispute over the year.