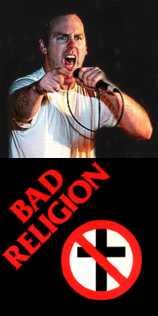 It was on this date, November 6, 1965, that the lead singer for punk rock group Bad Religion, and a Ph.D. in Paleoanthropology from Cornell University, Greg Graffin, was born in Madison, Wisconsin. Aside from being co-founder of his own punk-rock group, Graffin is considered one of the five leading bone tissue paleontologists in the world. He made his 2003 doctoral dissertation available online, and in it he discloses statistics vindicating the James H. Leuba* studies (1916, 1934), showing the overwhelming majority of scientists have little or no belief in God.

Graffin's naturalistic/rationalist views carry over into his lyrics for Bad Religion. In "Do What You Want," he sings, "I'll believe in God when one and one are five." In "Don't Pray On Me" he sings, "I don't know what stopped Jesus Christ from turning every hungry stone into bread. And I don't remember hearing how Moses reacted When the innocent first born sons lay dead. Well I guess God was a lot more demonstrative back when he flamboyantly parted the sea." In "God Song," Graffin sings, "Religion is just synthetic frippery unnecessary in our expanding global culture efficiency."

In an April 1998 interview in NYRock.com, "Gabriella" asked about what kind of faith he values. Greg Graffin replied,

Faith in your partner, your fellow men, your friends, is very important, because without it there's no mutual component to your relationship, and relationships are important. So faith plays an important role, but faith in people you don't know, faith in religious or political leaders or even people on stages, people who are popular in the public eye, you shouldn't have faith in those people. ...ultimately you have to base your views on evidence. Evidence comes from your own eyes and ears.**

* Professor James Henry Leuba, Ph.D. (1868-1940) psychologist, Professor at Bryn Mawr and author of several books on religion. Chiefly interesting for a most valuable inquiry which he privately made into the opinions on God and immortality of the leading scientific men and historians of America. The startling results of the first inquiry are given in Beliefs in God and Immortality (1916). The even stronger results of a new inquiry were given in an article in Harper's Magazine (August, 1934). (quote in Joseph McCabe, A Rationalist Encyclopædia, 1920).

“I'm an Atheist,” says Angier. “I don't believe in God, Gods, Godlets or any sort of higher power beyond the universe itself.... I'm convinced that the world as we see it was shaped by … evolution through natural selection.”