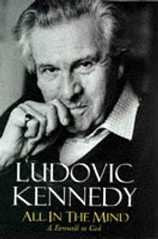 It was on this date, November 3, 1919, that British writer and broadcaster Ludovic Henry Coverley Kennedy was born in Edinburgh, Scotland. Ludovic Kennedy, the son of a sea captain who died in battle, saw action himself in World War II in the Royal Navy, then embarked on a successful career as a television journalist, notably in arts and current affairs programs. He has been a presenter on Independent Television News (ITN), and on various British TV news and entertainment shows, and has written for Newsweek magazine.

Kennedy has been awarded honorary degrees by the Universities of Edinburgh, Strathclyde and Stirling. His book 10 Rillington Place (1965), about the mid-20th century John Christie serial murder case, led to the abolition of the death penalty in England in 1965.* The book was made into a 1971 film, directed by Richard Fleischer. Ludovic Kennedy, known as "Ludo" to his friends, was knighted in 1994.

In 1999 Kennedy published his highly personal musings on the harm Christianity has done to civilization, All In The Mind: A Farewell To God, in which he details his philosophical objections to belief. Like most Freethinkers, Kennedy characterizes God as a creation of human beings, rather than the reverse.

* The BBC Web site has a comprehensive account of John Christie case at this link.

Michael Kinsley (1951) It was on this date, March 9, 1951, that writer and editor Michael Kinsley was born in Detroit, Michigan. Kinsley graduated from Harvard University in 1972, there distinguishing himself as vice president of the University's daily newspaper, The Harvard Crimson. After spending his Rhodes Scholarship at Magdalen College, Oxford, in the UK, […]