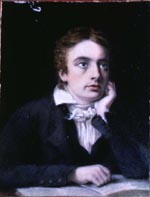 It was on this date, October 31, 1795, that British poet John Keats was born in London. His family was close, and when his father died in an 1804 riding accident, and his mother died of tuberculosis six years later, the 15-year-old Keats, two brothers and a sister, turned to each other.

Keats read a lot at school, but also was good with his fists for his five-foot (152 cm) frame. In 1811 Keats apprenticed to a surgeon-apothecary while studying for his own license, which he earned five years later. At the same time he completed his translation of Vergil's Aeneid. A meeting with Leigh Hunt in London yielded introductions to some of the leading literary talent in England, including Shelley, who published Keats's sonnet, "O Solitude." By his 21st birthday, his first long poem, "Endymion," was published.

The church bells toll a melancholy round,
Calling the people to some other prayers,
Some other gloominess, more dreadful cares,
More harkening to the sermon's horrid sound.
Surely the mind of man is closely bound
In some black spell; seeing that each one tears
Himself from fireside joys, and Lydian airs,
And converse high of those with glory crown'd
Still, still they too, and I should feel a damp, –
A chill as from a tomb, did I not know
That they are dying like an outburnt lamp;
That 'tis their sighing, wailing ere they go
Into oblivion; - that fresh flowers will grow,
And many glories of immortal stamp.

Keats wrote another of his well-known poems, "Ode on a Grecian Urn," in 1820, the year before he died, on 23 February 1821. He was only 25, yet most of his poetic and literary work was produced in a span of just four years. He was already infected with tuberculosis and, accompanied by his friend, the painter Joseph Severn, attempted a cure in Italy. William Sharp, who knew Keats, says in his biography of Severn* that Keats died without any belief in a future life.

Laughton's brothers invited a procession of priests to attend the dying man, as he lay drugged and gasping for air. Laughton mused, "I wish they were more intelligent."