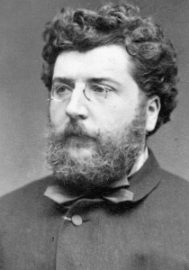 It was on this date, October 25, 1838, that French opera composer Alexandre César Léopold Bizet – know as Georges Bizet – was born in Paris. His parents home-schooled him in music and at the age of nine the precocious child was admitted to the Paris Conservatoire. There he studied under Gounod, Halévy and others, excelling as a pianist. Bizet composed his Symphony in C at age 17 and, in 1858, won the Prix de Rome, which allowed him three years of financial security to explore composition.

Bizet was never conspicuously successful during his short life, although Franz Liszt said he considered Bizet one of the three finest pianists in Europe. His most popular work is his 1875 opera, Carmen, which was based on an 1846 novel by Prosper Mérimée (an Atheist). He never got to enjoy Carmen's success: Bizet died just a few months following the opera's premiere, after the critics scorned it, at just 36, on 3 June 1875, in Bougival, France. Carmen's revival just five years later, and its enduring popularity since, proved the critics wrong: it was recognized as brilliant by Camille Saint-Saëns, P.I. Tchaikovsky, and Claude Debussy.

Bizet's letters, published posthumously (1907), reveal that he emphatically rejected Christianity, and may have had no religious beliefs whatever. In one letter, he writes, "I have always read the ancient pagans with infinite pleasure while in Christian writers I find only system, egoism, intolerance, and a complete lack of artistic taste."

Confucius (551 BCE) It was on this date, August 27, 551 BCE, by tradition, that the Chinese teacher and philosopher K'ung fu-tzu (孔子 Pinyin Kǒng Zǐ), known popularly by his Latinized name, Confucius, was born in the state of Lu. Though fatherless from the age of three, Confucius nevertheless acquired a good education and married […]