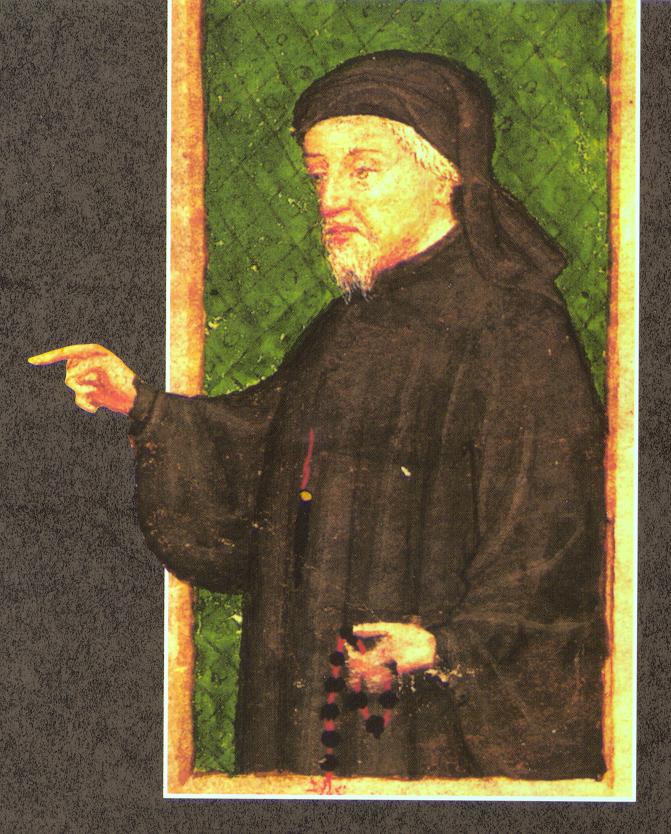 It was on this date, October 25, 1400, that the first great poet in the English language, Geoffrey Chaucer, died at his home in London. His date of birth is unknown, though it is probably around 1340-1343. Chaucer became a celebrated poet during his lifetime, which did not interfere with his day job as a diplomat, during which time he may have met the Italian poets Petrarch and Boccaccio. Chaucer has since become known as known as the Father of English literature. His most famous work, The Canterbury Tales, is a clever use of a pilgrimage to the shrine of Thomas Becket as a frame for poetic and prose tales.

His lesser works show that Chaucer loved to explore courtly love and the human condition, thoroughly secular artistry, often with some digs at the church. It is the same with the Canterbury Tales: Chaucer satirizes priests, monks and nuns. For example, the Summoner, a church official, tells his story about a friar who is taken down to hell, but sees no friars. Well, not exactly none: His guide shows them living inside Satan's ass! The Pardoner tries to live a life of good works, which is a clever dig at the church: it was common knowledge that most clerics used their guaranteed income for a life of leisure. But such satire was common in writers of Chaucer's day.

However, a thorough study by Thomas R. Lounsbury shows that Chaucer doubted immortality. Lounsbury remarks on a passage from "The Knight's Tale," "Can modern agnosticism point to a denial more emphatic than that made in the fourteenth century of the belief that there exists for us any assurance of the life beyond the grave?"* As time went on, Chaucer grew more "hostile" to the Church, as Lounsbury says, "in such a way that implies an utter disbelief in certain of its tenets."**

What, then, of the "Prayer of Chaucer" or "Retractation" which closes the Canterbury Tales? If it is genuine (and that is seriously disputed), it proves only that Chaucer was a skeptic when he wrote the main work. If it is not genuine, his protestations that he hoped not to give offence may have been inserted to save Chaucer's neck from the hangman or his reputation for posterity. Either way, we must remember that Chaucer had been to Italy as an ambassador and witnessed for himself the widespread disbelief in immortality — as Dante testified almost a century before in Canto X of the Inferno. Nevertheless, Chaucer is the first literary figure buried in what is now called the Poet's Corner in Westminster Abbey.

When asked about his inattention to religion, Langmuir once responded, "Never believe anything that can't be proved."