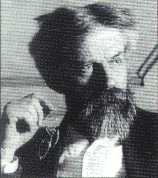 It was on this date, October 2, 1854, that the "father of town planning," Scottish biologist Sir Patrick Geddes was born in Ballater in Aberdeenshire. He grew up in Perthshire, and studied variously at London, Paris, Edinburgh, and Montpellier Universities. Geddes traveled widely and taught physiology, zoology, botany, sociology, civics and natural history – becoming a radical only in the sense that unlike his contemporaries, Geddes believed humans prospered where there was fresh air, gardens and good housing.

His idealism – he envisioned a kind of European Union – led him to design many cities, frequently in India (1915-1929), and spread his ideas in the US and across Europe. Geddes was knighted in 1931. He died on 17 April 1932 in Montpellier, France. Sir Patrick Geddes was a Freethinker and an Honorary Associate of the British Rationalist Press Association (RPA).*

* Amelia D. Defries, The Interpreter Geddes, the Man and His Gospel. London: G. Routledge and Sons, 1927.

Kurt Vonnegut Jr (1922) It was on this date, November 11, 1922, that science fiction and satire writer Kurt Vonnegut was born in Indianapolis, Indiana. Vonnegut enrolled at Cornell University as a biochemistry major, but left for the Air Force during World War Two. He was captured in May 1944 during the Battle of the […]