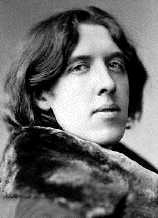 It was on this date, October 16, 1854, that Irish writer Oscar O'Flahertie Fingal Wills Wilde was born in Dublin. Oscar Wilde probably inherited from his feminist mother, by example if not by genetics, a flair for the dramatic in style and behavior. Wilde graduated from Oxford and moved to London to seek fame in 1878. He adopted a personal style of outrageous dress – created by theater costumiers rather than tailors – and behaved just as flamboyantly.

At college, even though he passed the exam on the Rudiments of Religion, Wilde shocked his peers and his dons with his irreverence. He became a Mason in 1876, but felt an aesthetic attraction to the ritual, if not the creed, of Roman Catholicism, which left him conflicted: "I have got rather keen on Masonry," Wilde wrote to William Ward in 1877, "and believe in it awfully – in fact would be awfully sorry to give it up in case I secede from the Protestant Heresy."[1] Wilde viewed all religions "as colleges in a great university," but was attracted to Catholicism, to which he never converted, as "the greatest and most romantic of them."[2]

After his first play and first volume of poetry became his first literary defeat, in 1884 Wilde married Constance Lloyd and fathered two sons, Cyril (1885) and Vyvyan (1886). He became editor of the magazine Women's World. But the settled life failed to satisfy. Soon Wilde was making excuses to be absent from his wife, usually to indulge in drink and the company of young men.

His literary triumphs, perhaps, made Wilde feel invulnerable to social criticism, which in Victorian times was often enforced by the courts. During his productive period he took up an intimate relationship with Lord Alfred Douglas, whom he called "Bosie," and lived up to his famous quip, "The only way to get rid of a temptation is to yield to it." He was tried on charges of homosexuality and sentenced to two years at hard labor for sodomy. Wilde's literary wit was crushed under the wheels of justice: when reading his sentence, the judge said that "people who can do these things must be dead to all senses of shame."

Wilde served the last period of his sentence in Reading Gaol, where he wrote De Profundis (1905), an autobiographical monologue. After he was released in 1897, a broken man, Wilde published The Ballad of Reading Gaol (1898), a plea for prison reform. "The great drama of my life," Wilde confessed to French writer André Gide, is "that I have put my genius into my life; all I've put into my works is my talent."

Wilde admired Jesus Christ, at least on the aesthetic level, but was skeptical of Christianity: "A thing is not necessarily true because a man dies for it,"[3] he said. About the Bible, Wilde mused sadly, "When I think of all the harm that book has done, I despair of ever writing anything to equal it."[4]

Wilde died of cerebral meningitis, penniless in Paris, on 30 November 1900. He was 46. His friend and literary executor Robert Ross brought in a priest to administer last rites, but Wilde was unconscious. Asked once by Lord Balfour to describe his religion, Oscar Wilde replied, "Well, you know, I don't think I have any. I am an Irish Protestant."[5]